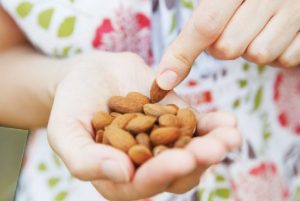 Daily consumption of almonds is likely to help reduce the severity of facial wrinkles in post-menopausal women, a first-of-its-kind study to examine the effects of the nuts on skin health has claimed. Researchers at the University of California (UC), Davis in the US found that a daily snack of almonds in place of other nut-free snacks improved measures of wrinkle width and severity in postmenopausal women.

The post-menopause is the time after which a woman has experienced 12 consecutive months of lack of menstruation. In the 16-week randomised controlled trial, published in the journal Phytotherapy Research, 28 healthy postmenopausal women with Fitzpatrick skin type 1 or 2 — characterised by increased tendency to burn with sun exposure — were randomly assigned to one of two groups, media reports said.

In the intervention group, women ate almonds as a snack, which accounted for 20 per cent of their total daily calorie intake, or 340 calories per day on average (60 grammes). The control group ate a nut-free snack that also accounted for 20 per cent of calories: a cereal bar, granola bar or pretzels. Aside from these snacks, study participants ate their regular diets and did not eat any nuts or nut-containing products.

Skin assessments were made at the start of the study, and again at four weeks, eight weeks, 12 weeks and 16 weeks. At each visit, facial wrinkles were assessed using high-resolution facial imaging and validated three dimensional (3D) facial modelling and measurement. “These high resolution cameras allow for 3D reconstruction of any wrinkles so that they can be mapped for their key characteristics of width and severity. The severity score is a calculation of the depth and length of a wrinkle,” said Raja Sivamani, Associate Professor of Clinical Dermatology at UC Davis, and lead researcher on the study.

By the end of the study at 16 weeks, photographic image analysis showed statistically significant improvements for participants in the almond snack group compared to the control group, the researchers said. They also found that wrinkle width decreased by 10 per cent, while wrinkle severity reduced by nine per cent. There were no significant changes in skin barrier function between groups, the researchers said. “Almonds are a rich source of antioxidant vitamin E and deliver essential fatty acids and polyphenols. They are a smart choice for overall good nutrition,” said Sivamani. “As seen in this study, almonds may hold promise as a food to include as part of a healthy ageing diet, especially for post-menopausal women.”

However, the outcomes warrant future studies with expanded population groups and additional evaluations for signs of skin ageing, the researchers said. Ageing is a long-lasting process so the findings from this study may be difficult to reproduce and generalise to extended periods of time, they said.

The researchers noted that skin-ageing is also multi-factorial in nature and although certain groups were excluded i.e. those with a smoking history, there is variance in ageing confounders, such as frequency of ultraviolet (UV) light exposure and emotional stress, which were outside the scope of the study.

For the study, researchers from Rovirai Virgili University and the Pere Virgili Health Research Institute (IISPV) in Spain, conducted a nutritional intervention study with healthy participants of reproductive age in order to determine if regular consumption of nuts has any effect on sexual functions.

The researchers analysed 83 individuals for 14 weeks who were following a western diet which is poor in fruits and vegetables and rich in animal fats. In a previous study, the same research group described how certain nuts such as walnuts, hazelnuts and almonds improved sperm quality, although then they had not established positive effects of nuts on sexual function.

According to the researchers, the prevalence of erectile and sexual dysfunction affects two per cent of men under the age of 40 years, around 52 per cent of men aged 40 to 70 years and more than 85 per cent of men aged over 80. The risk factors associated with sexual and erectile dysfunction are smoking, excessive alcohol consumption, a lack of physical exercise, stress and an unhealthy diet. Seeking to tap the growing almond market in India, the US is employing several innovative methods such as promoting the nuts as a healthy snack, conducting health research, and focusing on festivals, wedding ceremonies, and the food processing industry to boost sales in the country.

According to the Almond Board of California (ABC), direct almond shipments to India surged to a record high in 2016-17 at 167 million pounds making it the second largest export destination behind Spain at 210 million pounds. The shipments grew by 68 per cent between 2011-12 and 2017-18.

The board is focussing on families, gifts during festivals such as Diwali and wedding ceremonies, and the food processing Industry, said ABC President and CEO Richard Waycott. “The way forward is to continue to do more research in the country,” he said. “Almonds have been consumed over centuries in India because of the traditional knowledge and beliefs. Lately, we are beginning to see consumers looking for healthy snacks and almonds is one of the options which is getting picked up,” Sudarshan Mazumdar, ABC Regional Director — India was recently quoted as saying.

BENEFITS THAT  KEEP YOU  FIT

Almonds are high in antioxidants that can protect your cells from oxidative damage, a major contributor to aging and disease.

Almonds are among the world’s best sources of vitamin E. Getting plenty of vitamin E from foods is linked to numerous health benefits.

Almonds are extremely high in magnesium, a mineral that many people don’t get enough of. High magnesium intake may offer major improvements for metabolic syndrome and type 2 diabetes.

Eating one or two handfuls of almonds per day can lead to mild reductions in “bad” LDL cholesterol, potentially reducing the risk of heart disease.

“Bad” LDL cholesterol can become oxidized, which is a crucial step in the development of heart disease. Snacking on almonds has been shown to significantly reduce oxidized LDL.

While nuts are low in carbs, they are high in protein and fiber. Studies show that eating almonds and other nuts can increase fullness and help you eat fewer calories.

Though almonds are high in calories, eating them doesn’t seem to promote weight gain. Some studies even suggest the opposite, showing that almonds can enhance weight loss.

All things considered, almonds are as close to perfect as a food can get.