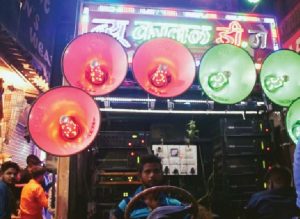 On May 2, 2020, Tehelka published an incisive analysis as to whether propagation of any religion required sound amplification and whether any such right, if claimed by any religious denomination, enjoyed protection of Article 25 of the Constitution. All the legal aspects expounded under the analysis “Does any religion require sound amplification for its propagation?” stand endorsed by a division bench of the Hon’ble Allahabad High Court, while deciding a PIL No.570 of 2020 today.

Afzal Ansari, Member of Parliament from Ghazipuri along with 2 others had filed a PIL against the State of U. P. seeking protection of fundamental right to religion of the people at Ghazipur to have recitation of the Holy Azaan by only one person “Muezzin” from the respective mosques of the District, since it did not violate any of the directives issued for controlling the threat of the spread of the Covid-19, and sought the Court’s direction to the State Administration to permit it during  pandemic.

It was pleaded that recitation of Azaan was an integral part of Islam and in no way undermined the society’s collective response to the pandemic. During the holy month of Ramzan, the entire Muslim Community all over the world observed fast approximately from sunrise to sunset. The timing of beginning and concluding the daily fast is marked by the sound of the Azaan. It was  also pleaded that the practice of opening the fast by the sound of the Azaan is an Islamic tradition since the time of Prophet and is being practiced for past 1400 years. Due to covid-19 restrictions the pronouncement of Azaan was not a congressional practice but was simply an act of recitation by a single individual, therefore it did not violate any conditions of the prevailing lockdown.

It was pleaded that District Administration of Ghazipur was restraining all the Mosques within the district from reciting Azaan. through sound amplifying devices, which was violative of fundamental right as provided under Article 25 of the Constitution. Reciting Azaan was for the welfare of a religious community. It is not in any way contradictory to public order, morality, health therefore, could be prohibited or restricted by the administration. Through PIL the Court was called upon to preserve the spiritual comfort and the wholesome spirit of constitutional right to worship of all citizens.

The petitioners averred that on account of increase in population, it was not possible for the Azaan to reach all believers of Islam. Therefore, reciting of Azaan through loudspeakers five times a day is part of religious rights guaranteed under Article 25. Any restriction or prohibition made with regard to recitation of Azaan through loudspeaker would have to be declared unconstitutional. Relying on various judgements of the Apex Court as well as the High Court of Calcutta in the case of Moulana Mufti Syed Mohammed Noorur Rehman Barkati and Ors. Vs. State of West Bengal and Ors., the Allahabad High Court held that although Azaan was certainly an essential part of Islam, yet the use of microphone and loudspeakers were not an essential and an integral part of Azaan.

No person has right to take away the right of others. There is no religious freedom in this country except under the provisions of Article 25, which is subject to public order, morality and health and other provisions of the Constitution. Freedom of religion is subject to others’ rights as guaranteed under Article 19(1)(a) of the Constitution, namely, religious freedom cannot abridge or take away or suspend others’ right under Article 19(1)(a) regarding their freedom of speech and expression.