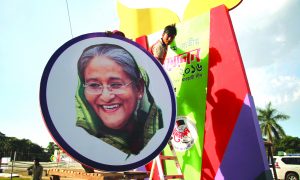 As our neighbour, Bangladesh approaches general (national) elections by the next few weeks, India can witness more political drama, confusion and chaos to be broken out from the populous nation. The ruling Bangladesh Awami League (AL) led by Prime Minister Sheikh Hasina expects another term in Dhaka, but the opposition parties are somehow organised this time to challenge the daughter of Bangabandhu Sheikh Mujibur Rahman.

Hasina’s party won the last national political battle in 2014 with little troubles as the main opposition party led by Begum Khaleda Zia boycotted the 10th Parliamentary polls. A huge number of AL nominees were elected to the 350 member-house unopposed. But this time, even though the former Premier Begum Zia has been put behind bars for many weeks under corruption charges, Bangladesh Nationalist Party (BNP) has  decided to join the polls with some other like-minded parties under the banner of Jatiya Oikya Jote (national united forum).

Unlike India, the country that regained independence from Pakistan in 1971 does not have an upper house of Parliament (read Rajya Sabha). Moreover, it has no concept of provinces (States) and hence the Prime Minister of Bangladesh often performs the duty like a chief executive officer. Need not to mention that its judiciary (even the Supreme Court of Bangladesh) also finds it difficult to go beyond various limitations.

The next national elections must be conducted before January 28, 2019, and the opposition parties are demanding to dissolve the Parliament. In absence of an upper house, the country preferred a neutral election-time (caretaker) government  to run various essential affairs, but the ruling AL has already rejected the demand. Hasina only assured that the election commission  would be given appropriate power to conduct the polls in a free and fair manner.

Bangla government has already stepped up its all-rounall-roundives for peeful polls and its law enforcement agencies are also put on high alert to prevent any untoward incidents in the coming days. The government agencies suspect that few elements in opposition camp, terrorists, underworld criminals and anti-liberation forces may create troubles in the country during the election. Meanwhile, special drives were conducted across the country to seize the illegal arms by the concerned authorities.

Speaking to this writer from Dhaka few days back, Bangla journalist and political commentator Saleem Samad disclosed that his country is presently in a poll-mode, as the general elections must be conducted within few weeks to elect a new regime. He agreed that there are some confusions arising after continued detention of Begum Zia and few other activists, but the polls must happen by end of the second term of Hasina as their Premier. The people are very enthusiastic to cast their votes, he added.

A keen observer of socio-political situations in South Asia, Samad however, admitted that the recent rise of Islamist extremism has been posing a serious threat to his Muslim majority country along with its neighbouring Indian states like West Bengal, Assam and Tripura. He narrated how secularist bloggers and LGBT activists are increasingly becoming the target of radicalised Muslims forces there.

“What is concerning for us that our country has slowly, but steadily, marched on the path of becoming a country of one nationality (Bangladeshi), one language (Bangla) and one religion (Sunni Muslim),” commented Samad. Citing how a network of Jamaat-ul-Mujahideen Bangladesh was busted in West Bengal few years ago, Samad urged India’s north-eastern region to remain alert about jehadi elements after the ongoing crackdown on Islamist forces.

The outspoken journalist revealed that thousands of Bangladeshi youths had joined various militia groups in Syria, Iraq, Chechnya, Indonesia, Philippines, Afghanistan, and Pakistan et al to fight alongside the jehadis there. He also expressed concern over the new Digital Security Act 2018, which has already come under fire from journalists, including editors, rights defenders and anti-corruption advocates.

International rights watchdogs have condemned the draconian law, which looks to criminalise freedom of press, speech and expression in that country.

Claiming that no visiting Indian political leader had ever spoken about illegal Bangladeshi migrants during parleys with their Bangladeshi counterparts, he pointed out that for the people of Bangladesh the issue of the National Register of Citizens updation in Assam remains an internal affair of India. Though Bengal chief minister Mamata Banerjee made a hue and cry about the Assam NRC draft, Bangladeshi politicians and the civil society are still reluctant to comment on the sensitive matter. Even Dhaka-based media outlets had little coverage about the process and its larger implications, asserted Samad.

For New Delhi’s interest, Hasina’s re-election may be an expected outcome, as the lady has made her commitment to make Bangladesh free from cross-border terrorism. Because of Dhaka’s relentless crackdown on terrorism, the northeastern militants had fled the country and many of the separatist leaders were pushed back into India. Only fugitive on the run is Paresh Barua (top leader of United Liberation Front of Assam-Independent), who also faces death penalty in the Bangladesh court.

There are more reasons to support the continuation of Hasina’s regime in Dhaka and both the countries had reached a steady bilateral relationship after many decades of diplomatic hiccups. Both New Delhi and Dhaka now regularly share common issues in an atmosphere of confidence and friendship.

The mutual trust has been further heightened after resolving half-a-century- old border demarcation disputes. Duty-free trade, joint venture infrastructure projects, commerce, tourism, visa regime, communication through road, rail, river and air were a few areas of discussion between both nations. The talks on sharing of water from 56 international rivers are also in progress.

Celebrated exiled Bangla author Taslima Nasreen, while expressing anguishes over recent arrests of many distinguished personalities under the digital security laws, made it clear that she still prefers Hasina over Begum Zia (allied with Jamaat-e-Islami) to rule her country. However she admitted that the faith and respect many progressive individuals across the globe had for Hasina is slowly dwindling. 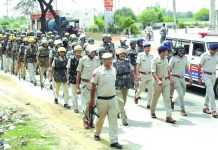