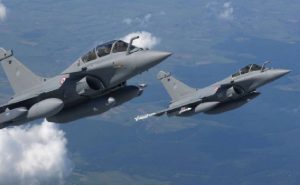 With no signs of the eastern Ladakh border row with China getting resolved anytime soon, India appears to be adopting a tough posture amid concerns over continued military buildup by the Asian dragon and a likely limited military conflict.

The border row that erupted in April this year has resulted in the two armies facing each other in a confrontation that looks unlikely to de-escalate as China has refused to back off despite several rounds of peace talks.

The hardening of India’s stand recently showed when Air Chief Marshal RKS Bhadauria asserted during his annual Air Force Day presser on October 5 saying China can’t get the better of India in a conflict situation.

“We have catered for all scenarios and are fully capable of handling any threat,” said Bhadauria, adding “we hope that the talks will progress along the expected lines.”

In the same breath, the IAF chief noted that he is aware of the Asian dragon’s deployment that includes surface to air missiles, air-launched long distance weapons and Chengdu J20 fifth-generation fighters, in the hilly region.

The IAF chief’s tough stance is significant as it came just days before the October 12 meeting of senior military commanders of the two countries. Nothing much was expected from this meeting as several rounds of discussions between the diplomats and military commanders of the two countries have been held over the past months but without any success.

However, India still hopes that the dispute could be resolved through talks. During the 19th meeting of the Working Mechanism for Consultation and Coordination on India-China Border Affairs (WMCC) held on September 30, the two sides reviewed the current situation along the Line of Actual Control in the India-China border areas and had frank and detailed discussions on the developments since the last meeting of the WMCC on August 20.

In this regard, the two sides positively evaluated the outcome of the 6th Senior Commanders meeting on September 21. They emphasized the need to implement the steps outlined in the joint press release issued after the last meeting of the senior commanders so as to avoid misunderstandings and to maintain stability on the ground.

In this context, the need to strengthen communication, especially between the ground commanders, was emphasized by both the sides.

On the ground the status quo is likely to prevail along the Line of Actual Control in eastern Ladakh even as the two armies get busy deploying their assets in the region and prepare for the winters.

“We have deployed to all relevant operational locations needed to access this area. Our further action will depend on the ground realities,” said Bhadauria.

According to some reports, India has deployed a large number of T-90 and T-72 tanks, and other armaments in the Ladakh area. The IAF was ready to strike immediately after the June 15 deadly clashes between the two armies in the Galwan Valley in which 20 Indian soldiers lost their lives while unconfirmed reports said the Chinese People’s Liberation Army suffered around 40 casualty. 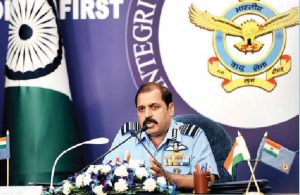 One reason behind the Air Force Chief’s confidence to face any threat from China’s PLA could be the five of the total 36 Rafale fighter jets from French manufacturer Dassault Aviation that India received on July 29. The 36 jet deal cost India a whopping 59,000 cr. The IAF is now considering buying 36 more Rafale aircraft and another over 100 multi-role fighter jets to strengthen its defence capabilities. Bhadauria acknowledged that such a deal is on the table but not yet final.

Addressing the staff after inspecting the 88th Air Force Day parade at the Hindon air base in Ghaziabad near Delhi on October 8, the IAF chief further assured the country that the IAF “will be ever ready to safeguard the nation’s sovereignty and interests in all circumstances.”

“As we enter the 89th year, the IAF is undergoing a transformational change. We are entering an era which will redefine where we employ aerospace power and conduct integrated multi-domain operations,” said Bhadauria.

The IAF chief thanked the air warriors for their role in backing the Army in Ladakh. “I commend all air warriors for quick response in the rent standoff on the northern frontiers when we deployed our combat assets at short notice to handle any eventuality and provided proactive support to all requirements of deployment and sustenance to the Indian Army,” he said.

The un-demarcated Line of Actual Control has been a bone of contention between India and China for decades and keeps throwing up occasional flare-ups but the latest border row is perhaps the worst.

The tough talking from India stems from a realization that China is not interested in resolving the border row peacefully and therefore keeps provoking the South-Asian country.

Recently, China made irrelevant claims on the LAC through an exclusive statement to the Hindustan Times newspaper saying the Asian dragon would go by the unilaterally defined 1959 version of the de facto border.

India rejected the statement saying it has never accepted the so-called unilaterally defined 1959 LAC and this position has been consistent and well known, including to the Chinese side.

“Under their various bilateral agreements including the 1993 Agreement on Maintenance of Peace and Tranquility along the LAC, 1996 Agreement on Confidence Building Measures (CBMs) in the military field, 2005 Protocol on Implementation of CBMs, 2005 Agreement on Political Parameters and Guiding Principles for settlement of the India-China Boundary Question, both India and China have committed to clarification and confirmation of the LAC to reach a common understanding of the alignment of the LAC. In fact, the two sides had engaged in an exercise to clarify and confirm the LAC up to 2003, but this process could not proceed further as the Chinese side did not show a willingness to pursue it,” India’s external affairs ministry spokesperson Anurag Srivastava said.

“Therefore, the insistence now of the Chinese side that there is only one LAC is contrary to the solemn commitments made by China in these agreements. As we have previously made clear, the Indian side has always respected and abided by the LAC. As the Raksha Mantri (Rajnath Singh) stated in the Parliament recently, it is the Chinese side which, by its attempts to transgress the LAC in various parts of the Western Sector, has tried to unilaterally alter the status quo,” he said.

According to the external affairs ministry spokesperson, in the last few months, the Chinese side has repeatedly affirmed that the current situation in the border areas should be resolved in accordance with the agreements signed between the two countries.

“In the agreement reached between External Affairs Minister Dr S Jaishankar and his Chinese counterpart Wang Yi on September 10 also, the Chinese side has reiterated its commitment to abide by all the existing agreements. We therefore expect that the Chinese side will sincerely and faithfully abide by all agreements and understandings in their entirety and refrain from advancing an untenable unilateral interpretation of the LAC,” said Srivastava.

The IAF chief’s remarks are also important as they came days before the foreign ministers of the US, Japan, India and Australia (the informal Quad) met in Tokyo on Oct 6 ostensibly to forge a common front against an aggressive China.

However, Bhadauria made it clear that India’s tough stance against China is not based on the support of any other country but the South-Asian nation is prepared to fight its own battle.

“American deployments are done as per their perspective. We don’t plan our efforts with support from someone else. They have not been deployed in coordination with us. We have to fight our own wars. No one will fight our wars for us. We have to do it ourselves,” said Bhadauria.

He was responding to reports over the deployment of the US B2 Bombers in the Indian Ocean being seen as an attempt to keep China under leash from trying any misadventure in the Himalayas.

The fact is the world powers are worried over Chinese aggression in the South China Sea and its attempts to gain influence in the Indian Ocean region.

In this backdrop, India’s External Affairs Minister Dr S Jaishankar had a bilateral meeting with the US Secretary of State Michael R Pompeo and also met Minister of Foreign Affairs of Australia Marise Payne and Foreign Minister of Japan Toshimitsu Motegi separately to discuss issues of mutual interest.

The Quad Foreign Ministers followed up on their discussions in September 2019 and discussed the post Covid-19 international order. While Pompeo was direct in attacking China, Dr Jaishankar refrained from naming the Asian dragon.

“The events of this year have clearly demonstrated how imperative it is for like-minded countries to coordinate responses to the various challenges that the pandemic has brought to the fore. You are all aware that India assumes membership of the UN Security Council next year. As vibrant and pluralistic democracies with shared values, our nations have collectively affirmed the importance of maintaining a free, open and inclusive Indo-Pacific,” Dr Jaishankar said.

“We remain committed to upholding the rules-based international order, underpinned by the rule of law, transparency, freedom of navigation in the international seas, respect for territorial integrity and sovereignty and peaceful resolution of disputes. Our objective remains advancing the security and the economic interests of all countries having legitimate and vital interests in the region,” he said.

US Secretary of State Michael Pompeo slammed the Chinese Communist Party over the Coronavirus which US President Donald J Trump has dubbed as the China virus as it originated in Wuhan in China last year and over Chinese aggression in the South China Sea besides Ladakh.

“Our partnership isn’t multilateralism for the sake of it. All of us seek a free and open Indo-Pacific and our conversations aim to achieve that good outcome. When we met, now last year, the landscape was very different. We couldn’t have imagined the pandemic that came from Wuhan. That crisis was made infinitely worse by the Chinese Communist Party’s cover up. The regime’s authoritarian nature led its leaders to lock up and silence the very brave Chinese citizens who were raising the alarm. America stands with each of you as we work to achieve victory over this horrible pandemic and rebuild our economies together,” said Pompeo.

“As partners in this Quad, it is more critical now than ever that we collaborate to protect our people and partners from the CCP’s exploitation, corruption, and coercion. We’ve seen it in the south, in the East China Sea, the Mekong, the Himalayas, the Taiwan Straits. These are just a few examples,” he said.

Beyond tough talking by the US at the Quad ministerial meeting and the forthcoming India-China peace talks, it will be interesting to watch if the Ladakh border row de-escalates before the BRICS virtual summit on November 17 in which Indian Prime Minister Narendra Modi and Chinese President Xi Jinping would come face to face for the first time since the LAC dispute erupted in May.

Before the eastern Ladakh border row, both Modi and Xi had displayed great bonhomie at Ahmedabad in Gujarat in 2017 and later at Mamallapuram in Tamil Nadu in 2019. 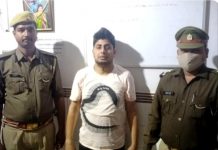 Concern voiced as UP police turn the heat on journalists