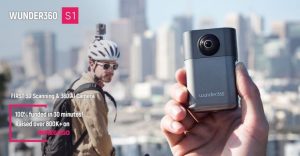 In the past two months, Wunder360 S1 has attracted more than 7000 individual backers and unlocked eight stretch goals. And now the project has been selected as the Indiegogo Team Favorites Collection.

With the campaign starting on 3rd July, the Wunder360 S1 showed up as a one of its kind AI camera featuring real-time 3D reconstruction and real-time high resolution 360-degree video stitching. The ability makes it immediately differentiate from the other compact 360 cameras under $500 price tag. Meanwhile, with Wunder360 S1, users can directly output, stream or share the 360-degree videos from the camera without the need to wait for power consuming after-process on their phones or PCs. For comparison, the $370 priced Ricoh Theta and the $699.99 priced GoPro Fusion both need companion application or even more than one micro SD cards for video stitching.

With the concept of AI in mind, Wunder360 S1 is designed as the consumer-oriented compact camera eabling consumers to the ability of creating 3D models from their 360 footages captured by the camera. The 3D models generated by the Wunder360 cloud service is available for online sharing and cloud also be imported into mainstream 3D editing software. According to Wunder360 team, the cloud service generates high-quality 3D point cloud and creates a 3D model from it. The models could also be imported into Minecraft or viewed in VR/AR headsets like HoloLens. For enthusiasts and professionals in certain areas, Wunder360 team provided a tool for them to convert the models into virtual tours which could be viewed through web and mobile phones.

Benefiting from the built-in high-performance DSPs and Deep Learning algorithms, the Wunder360 S1 delivers a bunch of intelligent editing functions for flat video lovers alongside the 360-degree and 3D features.

Simulating human habits and recognizing the main subjects in the videos, the computer science team of Wunder360 built a CNN (convolutional neural network) deep learning framework which keeps the important subject in the center of the frame in auto edited videos.

People may have heard about multi-exposure in photographic, but it is a very sophisticated procedure for general users to create a video with multiple figures in action. With the smart algorithm exclusively developed for Wunder360 S1, the Phantom Clipper feature help to capture the movements of the main subjects and automatically creates multiplies of the subject in the video.

Considering the portability, Wunder360 S1 weights less than 100g (97g, to be precise) with the battery and fits right in user’s palm. Users can buy standard action camera batteries in both online and local stores for it. With the standard 1/4-inch socket under the camera and the GoPro standard socket under the waterproof case makes sure, users can always use Wunder360 S1 comfortably with the familiar accessories.

And one more thing to mention. Thanks to the real-time stitching ability, users can directly view the 360-degree video stream from the Wunder360 S1 camera. It makes Wunder360 S1 a perfect monitoring tool for both indoor and outdoor scenarios. Users will not miss a single detail with the wide angle dual-fisheye-lens.