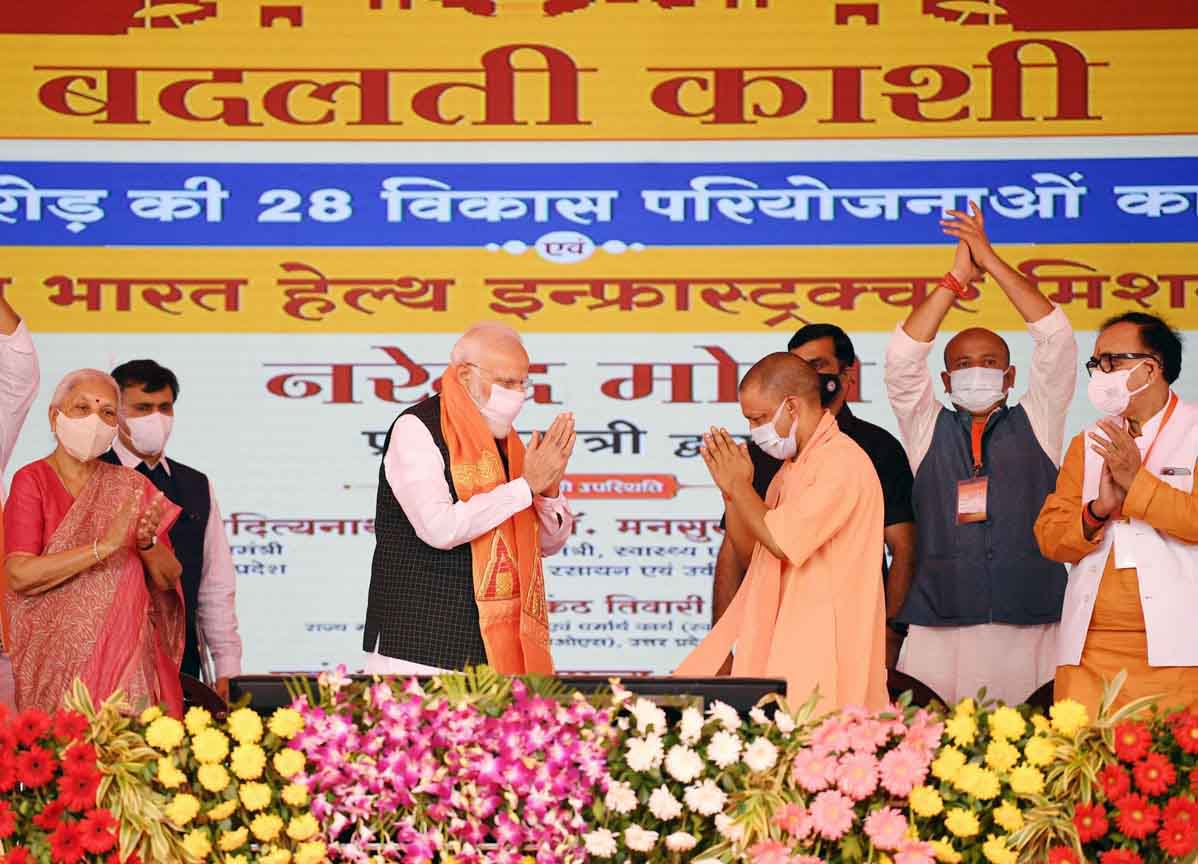 The attack comes in the backdrop of apparent losses in the Panchayat polls in the poverty ridden eastern belt of UP, where Modi-Yogi duo had steered BJP to landslide wins in 2017 Assembly and 2019 Lok Sabha polls.

After a mammoth rally of Congress General Secretary Priyanka Gandhi at Prime Minister’s bastion in Kashi, it was a turn of Prime Minister Narendra Modi to hit back to hold his fort that he continued to conquer in the last two parliamentary elections. While inaugurating various development projects worth more than Rs 5,200 crore for Kashi, Modi in his unique style fired fresh salvo at Akhilesh Yadav alleging that during the Samajwadi Party rule,“the cycle of corruption ran round the clock filling the coffers of their family members.”

“They had the priority of earning for themselves and filling the coffers of their families while for us the priority is to extend basic facilities to the poor,” PM remarked.“There was corruption in medicines, ambulance, appointments, transfers and postings and in this entire game some ‘parivarwadis’ (dynast) in Uttar Pradesh flourished,” he accused. “The cycle of corruption ran 24 hours but the common families of Purvanchal and Uttar Pradesh got crushed,” he added.

The attack came in the backdrop of BJP’s apparent losses in the Panchayat polls in the poverty ridden eastern belt where the influence of Modi-Yogi paved the way of landslide victory for the Bhartiya Janata Party (BJP) in 2017 Assembly and 2019 Lok Sabha elections. Prime Minister Narendra Modi addressed two rallies at Siddharthnagar and Kashi besides attending inaugural function of International Airport at Kushinagar showcasing infrastructural development of eastern Uttar Pradesh together with Express Highways connectivity under Yogi Adityanath leadership. 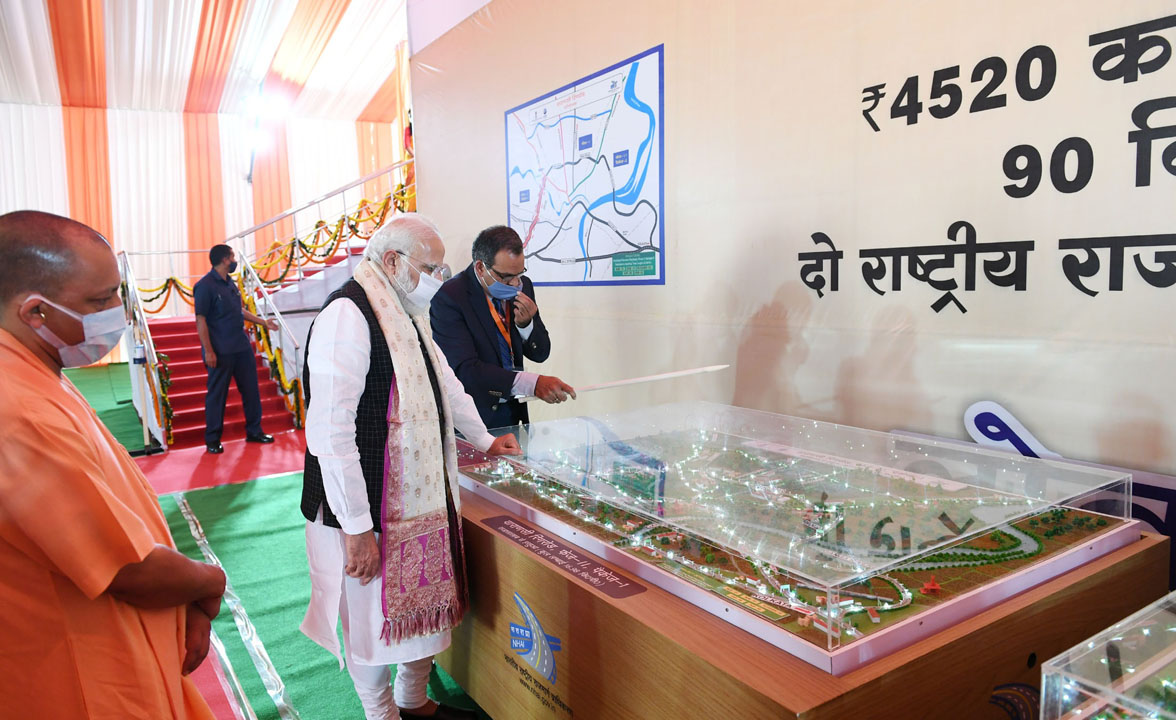 In Kashi rally, Prime Minister Modi launched the largest pan-India schemes for strengthening healthcare infrastructure across the country, Ayushman Bharat Health Infrastructure Mission, from his political turf in Uttar Pradesh. It is in addition to the National Health Mission. Its objective is to fill gaps in public health infrastructure, especially in critical care facilities and primary care in both urban and rural areas. It will provide support for 17,788 rural health and wellness centres in 10 high focus states. Further, 11,024 urban health and wellness centres will be established in all the states.

Blaming the previous regimes since Independence for not granting adequate priority to medical infrastructure, Modi highlighted that the scheme envisaged critical care services to be available in all the districts of the country with more than five lakh population through exclusive critical care hospital blocks, while the remaining districts will be covered through referral services. People will have access to a full range of diagnostic services in the public healthcare system through a network of laboratories across the country, and integrated public health labs will be set up in all the districts.

Prime Minister Modi inaugurated nine medical colleges in Uttar Pradesh virtually from Siddharthnagar rally claiming BJP’s priority is to provide basic facilities to the poor. Lashing out at the previous governments in Uttar Pradesh for ignoring basic medical needs of the people of Purvanchal region, PM Modi asserted, “The region will now emerge as a medical hub under the BJP rule.”

“In previous governments there was no strategy at the national level to deal with the problem of shortage of doctors and rules and institutions formed to look after medical education and medical colleges running with the old system also proved to be an hindrance in setting up new medical colleges. However, in the past seven years such old procedures have been changed creating hindrance in medical education,” Modi asserted adding this can be seen in the rise of number seats in medical courses from around 90,000 in different medical colleges across the country before 2014 with adding up 60,000 new seats in the past seven years.

Eight medical colleges have been sanctioned under a Centrally sponsored scheme for establishment of new medical colleges attached with district or referral hospitals. “From 1947-2016, only 12 government medical colleges were there in the state but now under PM Modi’s leadership, 30 medical colleges will be opened. Out of 30, MBBS classes have started in 7 colleges, and today we are inaugurating 9 more; 14 more in future,” Chief Minister Yogi Adityanath said at the event.

Political observers feel that Prime Minister Narendra Modi and Chief Minister Yogi Adityanath overreached on the issue of medical infrastructural schemes because eastern Uttar Pradesh suffered major causalities during the peak of second surge of Covid-19 when existing medical facilities crumbled to handle heavy load of patients amid acute shortage of oxygen, beds and ventilators in the hospitals. The floating dead bodies in river Ganga also came as major setback for the government. The new initiatives are aimed at overcoming anti-incumbency factors resulting from price hike of essential commodities including LPG, diesel and petrol.

Earlier on 20th October as part of the government’s endeavour to connect Buddhist pilgrimage sites from rest of the world, the Prime Minister Modi inaugurated a new international airport at Kushinagar in eastern Uttar Pradesh at an estimated cost of Rs 260 crore. Kushinagar is an ancient Buddhist pilgrimage centre being the final resting place of Gautama Buddha where he attained Mahaparinirvana.

After inaugurating the airport, Modi said it will boost connectivity and tourism that will develop an entire economic ecosystem in the region and create new job opportunities. He said the government’s special attention to the development of places associated with Lord Buddha and developing Kushinagar are among the top priority areas for the UP and central governments.

He said under UDAN scheme more than 900 new routes have been approved in the last few years, out of which air service has started on more than 350 routes. Besides, more than 50 new airports or those which were not in service earlier have been made operational, he added.

The Kushinagar airport would make easy the journey of Lumbini, Bodhgaya, Sarnath, Kushinagar, Shravasti, Rajgir, Sankisa and Vaishali of Buddhist circuit that will be covered in lesser time. PM Modi underlined that the Kushinagar airport will help develop an entire economic ecosystem in this region and also create new job opportunities.

“In UP alone, including this airport, 9 new airports and terminals have been made available to people. Jewar Airport, which will be India’s largest airport, is also being worked on at a record pace,” said the Prime Minister.