On dharna at Tikri, Ghazipur and Singhu borders of Delhi for more than 150 days, farmers aver to continue protest till the three farm laws are repealed and their other demands met with, reports Rajesh Moudgil 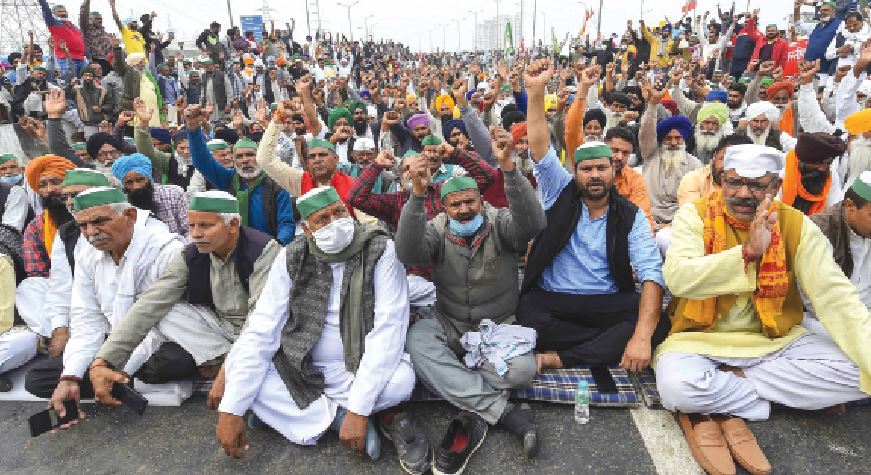 After a brief lull in their protest against the three contentious farm laws, the flocks of farmers have begun to return to the Tikri, Kundli, and Singhu borders around Delhi and their stir seem to be getting charged up again.

Though the farmers’ agitation had begun about eight months ago immediately after the said farm laws came into being, their dharnas (sit-ins) started at the Delhi borders from November 26, 2020. Their protest reached a flashpoint on January 26, (Republic Day), 2021, when some of the protesters reportedly violated the given routes and even clashed with Delhi police. The stir, however, appeared to steadily lose its steam as the gatherings thinned at the dharna spots.

Even though, the main reason behind the same was cited to be the harvesting time of wheat (rabi) crop back home in Punjab and Haryana, the talks were also agog, nonetheless, that many left as they felt grossly unhappy for the farmer leaders going to poll-bound states leaving the farmers camping at the dharna spots. This was besides the reports that fatigue too had set in among some farmers who thus left the Delhi borders for home, though for the time being.

However, the subsequent to the call of “phir Delhi chalo’’ (call for march to Delhi again) or “gherao’’ Parliament given by farmers’ leaders, throngs of farmers from the two agrarian states have now begun to return to the Delhi borders, this time, despite the fresh surge in the Covid-19, especially in Punjab, Haryana and Uttar Pradesh.

Reiterating that they would not move out from the dharna spots, a large section of the farmers even claimed that there were no reports of the Covid-19 cases among them.

Decision on next step soon

The farmers’ consistency to stay put at the dharna spots notwithstanding, there still appeared to be division among them over the call to gherao the Parliament as was initially announced by their leaders.

There were reports that a large number of young farmers raised this demand at a recent meeting of the SKM at Kundli border (near Singhu border) though they were pacified by their leaders.

The farmers’ leaders, however, held that the issue pertaining to march to Delhi would be discussed and a decision on the Parliament gherao taken at a decision in the next few days — early May.

This meeting was also deferred reportedly due to some internal reasons though a large number of young farmers, mainly from Punjab and Haryana, gheraoed them and sought the leaders to announce the date to gherao the Parliament. According to information, the farmers raising this demand were associated with gangster-turned-social activist Lakha Sidhana and some other organisations.

The farmer leaders who briefed the newspersons after the meeting agreed that the decision on the march to parliament was yet to be taken and that they had pacified the young farmers. Stating that while the sentiments of the youths were welcome the leaders, however, said that their way to express it was not right. It was a farmers’ movement in which no decision would be taken under any pressure, they added.

Meanwhile, arriving at an understanding on the issue of fast spreading Covid-19 the SKM has decided that proper sanitisation and cleanliness would be ensured at protest sites of farmers.  Masks and other essential equipment would be distributed to the farmers.

It may be recalled that the Haryana government has set up vaccination centres around the dharnas though only a section of protesters have so far got vaccinated.

The SKM leaders including Harinder Singh Lakhowal and Satnam Singh Ajnala said in a statement that the farmers would have to take the Covid test after observing symptoms. Farmers were already living in the open space and with physical distancing, they said and added that the SKM was fighting against agricultural laws as well as against Corona. They rued that in the Corona lockdown times, when everyone was “imprisoned’’ in homes, the government had imposed “anti-farmer and anti-people agriculture laws’’.

“Even today, elections are important for the BJP and not the people of the country. BJP has a choice whether to hold an election rally or not, but the farmers have no way but to protest. The farmers will withdraw their protest if the government withdraws the farm laws and enacts a law on MSP’’, the statement read.

The government should prove how many people have been diagnosed with Covid due to the farmers’ protests, instead of spreading false propaganda against the farmers. The corona epidemic was also used against farmers last time and the same is again happening, the leaders complained and added that eminent academicians, lawyers and
intellectuals have written to the Central government and the SKM, calling for
dialogue again.

It may be recalled that the farmers were earlier opposed to Haryana Health Minister Anil Vij’s offer of sending medical teams to conduct Covid tests, though welcomed his idea of vaccinating protesters.

They alleged that they (doctors from Haryana) would carry out tests and
declare some of us Covid-positive and then force us to wind up the protest. We will not fall in the trap. We have a hospital here and more than 40 doctors are available round the clock. Not one farmer has died of Covid at the Delhi borders.

Gurnam Singh Charuni, president of the BKU (Charuni) and other leaders including Rakesh Bains were also vocal against the testing and even alleged that the Covid was a farce. “Testing protesting farmers under the pretext of Covid is a ploy to wind up the protest. The Centre wants to malign the protest in the same manner it maligned the Tablighi Jamaat last year,” Charuni alleged.

Meanwhile, the SKM has agreed to remove barricades on one side of the highway at Singhu border so as to give free passage to oxygen tankers, ambulance and other such emergency services vehicles. Farmers would support in every possible way the fight against the corona pandemic, the farmer leaders said.

Meanwhile, the Covid-19 situation in Punjab, Haryana and their capital Chandigarh continued to be grim due to the fresh surge in the cases. The governments have thus announced stricter curbs including night curfew and strictly adhering to various restrictions pertaining to the people’s gathering as well as functioning of offices and business establishments. While Punjab has already seen highest single-day spike in deaths, 76, Haryana’s highest spike in a day has so far been 55. While the worst Covid-hit districts of Punjab are SAS Nagar,Ludhiana, Amritsar, Patiala and Bathinda, Haryana’s worst hit districts include Gurugram, Faridabad and Sonepat, which border Delhi, where the situation has reached a critical stage.