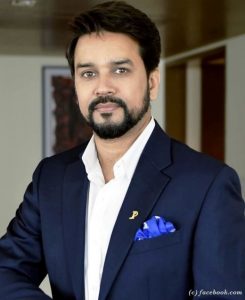 WHEN Narendra Modi was general secretary incharge for this hilly state in the late nintees, he used to stress on the senior BJP leaders to formulate a draft and impliment it when party comes to power so that tourism should be made as one of the most important pillars of the economy in the state. However in these decades nothing has been done on this front and sitution is same. This election results has given an oppurtunity to this state to redefine itself on this front.

There is one more important thing which this verdict have given to the hilly state.  May be on national political scenerio, Himachal is a very small state, the thumping majority of the BJP have opened  a way for good opurtunities to this hilly state. Not only on the developmental front but on political front also. Anurag Thakur, a four time MP from Hamirpur have been inducted in the Modi council of ministers.

There are words doing the round that Amit Shah, who now have joined the modi government as a senior minister,  is likely to quit as BJP president. His term as BJP chief have already ended. As JP Nadda, a Rajya Sabha member from Himachal Pradesh, who was health minister in the previous Modi government, has not been inducted in the ministry. This indicate that Nadda is all set to be next BJP chief.  He had been a member of the core committee lead by Shah and was assigned important jobs during last four years in the BJP. He was made incharge for UP in the recent lok sabha polls despite that fact that he was not holding any post in the organisation.

If we see seniority wise Anurag Thakur, elected from Hamirpur for the fourth time continously was the senior most members elected to the Lok Sabha. So his induction in the Modi government is not surprising for many. On  the other hand it is second term for Ram Swaroop, elected from Mandi while Suresh Kashyap, a retired army officer, elected from Shimla reserve constituency, is elected for the first time to the lower house of the parliament.  So there was a week possibility of them to get ministerial bearths.

The results have broke all previous records of victory margin in the state. Even in 1984 elections when Congress swept the Lok Sabha elections throughout the country in strong sympathy wave after the assesination of Indira Gandhi and secured 411 seats, Congress could not win like this way, the BJP won in Himachal Pradesh in 2019 elections.

For example despite strong wave, in Hamirpur Congress winning candidate Narayan Chand Prashar secured 2,42,214votes while his nearest opponent Prem Kumar Dhumal secured 1,17,281 votes and the victory margin was 1,24,933. However, in 2019 election with increased number of voters winning BJP candidate BJP’s Anurag Thakur secured 6,82,692 votes while his rival Ram Lal Thakur of Congress could get only 2,83,120 votes and the margin of victory for Anurag was whopping 3,99,572. Only 428 votes  less then four lakh.

This election have posted a serious threat in front of state Congress.  BJP secured lead even from the constituencies of all senior leaders of the Congress including Mukesh Agnihotri, leader of the opposition in the state assembly. This is for the first time that BJP succeeded in getting lead in Agnihotri’s Haroli constituency in Una district. Agnihotri, however feel that there is nothing to be worried about. ‘’This election was fought on a mixture of Hindutava and extreme nationalism and not on the issues related to the common masses of the country. BJP government lead by Modi at the centre had failed badly to deliver in five years so they choose this emotional issue just to win the election. We accept the verdict of the people and will do every thing to bounce back under the leadership of Rahul Gandhi,’’ addded Agnihotri.

However, Former chief minister Prem Kumar Dhumal do not agree to the viewpoint of Agnihotri and said that nationalism is not a thing to feel shame. He told the Tehelka- ‘’Modi have succeded in breaking the outdated formations of politics established in the country by the Congress and all others based on caste, religion and secularism of appeasement etc etc in these years. Modi has defined the politics which include all in the society. He is an architact of Naya India which is above all of caste, religion and region.’’

With results out, two of the assembly seats have fall vacant in the state. One is Dharamshala, where BJP candidate Kishan Kapoor had won in 2017 elections.  Now he has been elected to the Lok Sabha. The second seat is Pachhad in Sirmaur district. BJP MLA Suresh Kashyap won this seat in 2017 by beating senior Congress leader and former minister GR Musafir. There is posibility that Congress may again field him. However, there is doubt about Congresas fielding Sudhir Sharma, considered to be close to Rahul Gandhi, who had lost assembly election in 2017 to Kishan Kapoor.

Jai Ram wears a image of a clean leader, however many feel that he have to work better on government front.  Senior leaders in the BJP feel that Jai Ram need to tight the noose of the beaurocracy so that the projects are completed on time and people could get the benefit of it.

Himachal Pradesh is a state where two party system is strong for the last few decades. No other party could find space in between Congress and the BJP. Though CPI (M) has succeeded in getting few votes in the state on certain seats and a CPM candidate Rakesh Singha won the assembly election in 2017, no strong third front  could come in the fore after Sukh Ram’s Himachal Vikas Party (HVC) which won fove seats in 1998 assembly elections and played a decesive role in the formations of Dhumal government. However, in 2019 elections a new trend is seen in the Himachal voters. As many as 33,008 people pushed the NOTA button in the elections which is the highest ever in the history of this hilly state. Anf this too when there was a pro-Modi wave working on the ground. The Kangra seat received highest number of NOTA votes with a figure of 11,327 votes while Shimla received 8357, Hamirpur 8026 and Mandi minimum of 5298 votes.  Former Director of Information and political analyst BD Sharma says that this number is surprising. ‘’We have to address these people also. May be this number increase in future. Political parties have to find out why such huge number didn’t showed interest to vote them,’’ he added

Its end of draught for Dhumal family

With Anurag Thakur becoming a minister in the Modi government, the 15 month draught for Dhumal family has finally ended. His father Prem Kumar Dhumal, a two time chief minister of the state, was declared CM candidate by the BJP in December 2017 assembly elections, however he lost the election by a thin margin. Now the baton has been passed to the younger generation and Anurag have become minister at the centre. On the political front this has ofcourse given strength to Dhumal also, who didn’t left any stone unturned during the election campaign to work for the BJP candidates, specially his son Anurag Thakur.  Dhumal already holds enough clout in the state BJP workers. The BJP chief Amit Shah had promised people of the Hamirpur during election campaign that if you ensure thumping majority win for Anurag, he will be given a big Post. People of the constituency voted for Anurag with open heart and now Shah have also fulfilled his promice. This is very intersting to note a fact that when Dhumal  first time had become chief minister of Himachal Pradesh in 1998, it was Narender Modi, the then state BJP incharge, who ensured that Dhumal becomes the CM. 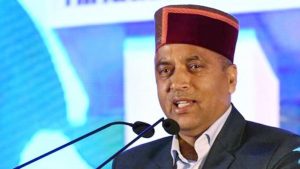 Positive poll  results have strengthen  the position of chief minister Jai Ram Thakur in the state BJP. There was a big challenge in front of him to retain all four seats of the state which party had won in 2014 lok sabha elections. However, the Modi wave helped BJP in sweaping the results. BJP also succeeded in bagging the Mandi seat, home constituency of the chief minister as he belongs to the Saraj area which falls in Mandi district.

BJP had won all 10 seats in Mandi district in 2017 assembly elections after tall leader Sukh Ram had joined the BJP alongwith his minister son (in Virbhadra Singh govt) Anil Sharma and grandson Ashrey Sharma, who then was Congress incharge in the Saraj mandal. After assembly elections BJP also made Anil Sharma minister in the Jai Ram government in 2017.

Sukh Ram, however returned to the Congress fold just before the nominations for the Lok Sabha polls 2019 and also managed Congress ticket for his grandson Ashrey. However  this election proved as political disaster for Sukh Ram family as his son Anil Sharma was forced by the BJP to quit as minister just after his son got the Congress ticket and later Ashrey got humiliating defeat in Lok Sabha election.

CM Jai Ram himself described it as a victory of masses and of Modi, the leader of masses. ‘’This election have changed the discourse of the Indian politics. This is victory of the masses of the country as our PM Modiji said in the election campaign that this election is between people of the country and gathbandhan parties,’’ added Jai Ram Thakur. He said the victory of the BJP lead government at the centre will help us (state) in getting better budget and schemes and projects for the state. ‘’Already the outgoing Modi government had given the state a number of road and other projects and enough budget to run the schemes which were almost defunct during previous Congress government,’’ added the CM.