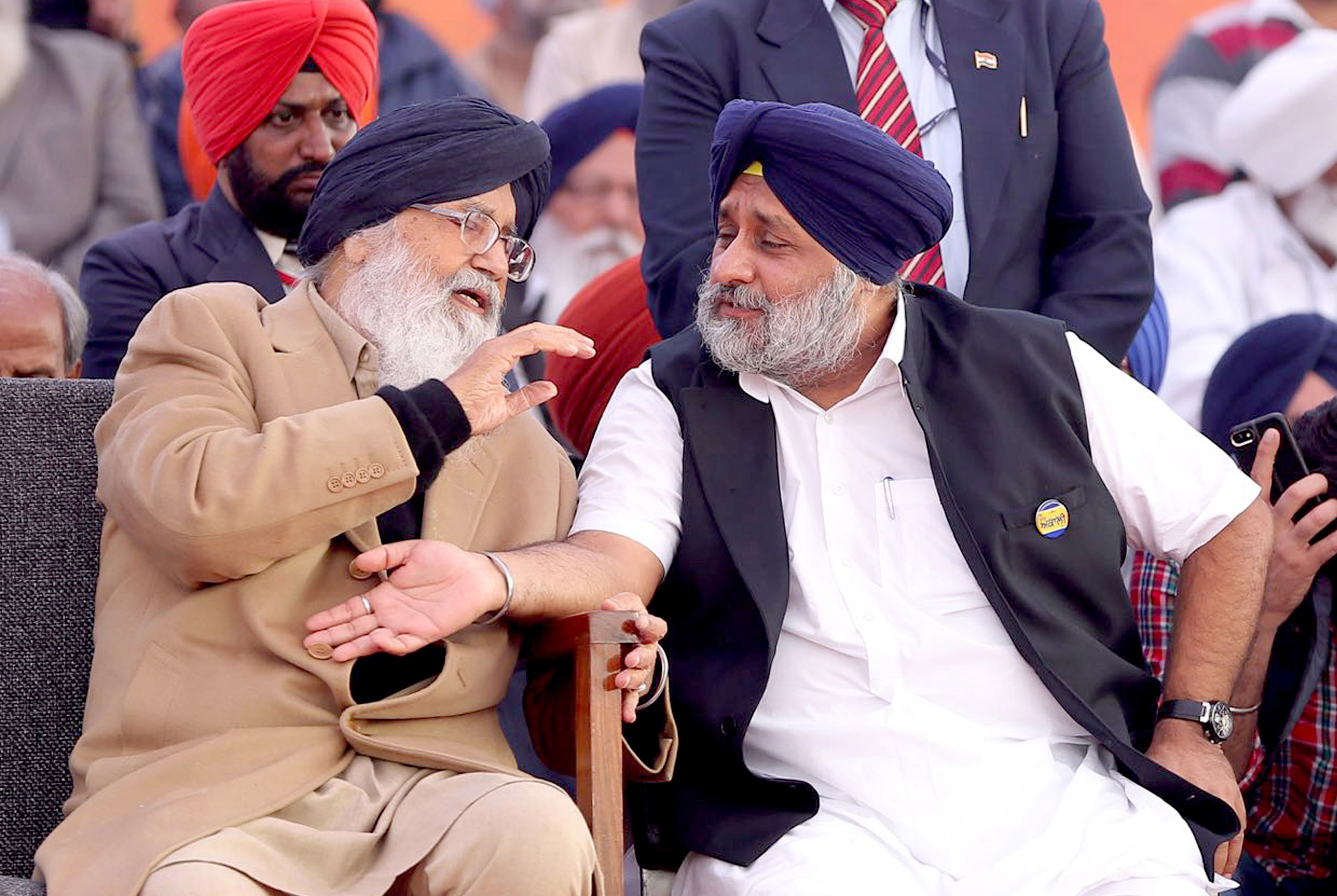 SAD patriarch and four-time CM Parkash Singh Badal has lost his traditional seat of Lambi after five decades. It is after three decades that Punjab’s major political family of Badals will remain unrepresented in the Punjab state assembly. A report by Bharat Hiteshi

All from the Badal clan, who contested the 2022 state Vidhan Sabha elections, have lost the polls from their respective strongholds. And there would not be anyone from the Badal family in the newly elected state assembly.   The last time it happened was during the 1992
elections when Shiromani Akali Dal (SAD) boycotted the state assembly elections.   In the 1997 state poll, SAD patriarch Parkash Singh Badal formed the coalition government with BJP and became the state’s chief minister for the third time. Since then, the Badal family remained part of every state assembly.

Four-time CM senior Badal lost from his home turf Lambi constituency. He was representing the seat since 1997 and remained the MLA for 10 terms.  The 94-year-old stalwart leader lost the elections to Aam Aadmi Party (AAP) candidate Gurmeet Singh Khudian.  Shiromani Akali Dal patriarch Badal has the distinction of governing the state for a maximum number of times and for the longest stretch of 10 years and 15 days (2007 to 2017).   After being elected as sarpanch, Badal had won his first Assembly poll in 1957 and had remained invincible since 1969.

Parkash Singh Badal’s son Sukhbir Singh, who is the party president, lost the election from Jalalabad seat. He lost to AAP candidate Jagdeep Kamboj.  Sukhbir Singh Badal was the deputy chief minister when his father senior Badal remained the CM for the last time during
the 2012-17 tenure.

Parkash Singh’s nephew Manpreet Singh Badal, who is contesting from Congress ticket from Bathinda Urban seat, lost to AAP’s Jagroop Singh Gill.    Manpreet was the finance minister in the incumbent government and before that, he also remained finance minister in the SAD-BJP government in 2007-12. Later he quit from SAD and floated his own party and later joined Congress.

Former CMs Parkash Singh Badal, Capt Amarinder Singh and Rajinder Kaur Bhattal and incumbent CM Charanjit Channi were among the stalwarts who tasted a crushing defeat in the Assembly polls. The biggest upset was in Lambi where SAD patriarch and five-time CM Badal, whose career spans over seven decades, lost his traditional seat to AAP’s Gurmeet
Khudian by 11,357 votes. After being elected as sarpanch, Badal had won his first Assembly poll in 1957 and had remained invincible since 1969.

Interestingly, Congress candidate, Sandeep Jakhar bucked the trend and won from Abolar segment by defeating AAP’s Kuldeep Kumar by a margin of 5471 votes. He is the fourth member of the well known Jakhar family who succeeded in Assembly elections.

So, when AAP swept Punjab,  Raghav Chadha, who ran AAP’s Punjab poll campaign said that it was not only “jharoo” or broom but a “vacuum cleaner”. There are talks already that AAP has become the “principal challenger to the BJP”.  There are other assemblies which will go to polls in 2022 and 2023.  It is at this time that AAP with a victory in Punjab is sure to position itself as a challenger to BJP.  A senior AAP leader said that Gujarat may be AAP’s focus next.  Haryana too could be a State where AAP will position itself.

The Delhi model and Kejriwal’s appeal to voters “Ek Mauka” or just once chance–which made Punjab voters vote for AAP–if replicated successfully in Punjab could very well be AAP’s winning card in other states.   The good thing for AAP and for the Opposition is that the AAP is an answer to the new generation’s aspirations.  No doubt that
Arvind Kejriwal’s Aam Aadmi Party is set to foray into national
politics.

The landslide win in Punjab has positioned AAP in direct competition to the nation’s grand old party, the Congress.  In the five-state Assembly polls, which were regarded as a kind of semi-final, the Congress has been decimated. After the loss in Punjab, Congress is left with only two states — Rajasthan and Chhattisgarh.

Arvind Kejriwal, while addressing the party workers at the party office in Delhi immediately after the results, said that this was a stamp on honest politics and “Bhagat Singh said that the system has to be changed and the people of Punjab have changed the system.”  The party has often made a mention of its national ambition, and has fielded candidates in several states. With the Punjab win, the ambition finally seems to be taking shape. Kejriwal shares a good
rapport with non-BJP leaders, including Mamata Banerjee, Sharad Pawar and Akhilesh Yadav.

AAP’s Punjab in-charge Raghav Chadha said that the BJP took 10 years to form its government in a state, but AAP has expanded its base to second state in Punjab and in both the states the AAP has got landslide victory.  Apart from Punjab, AAP has performed well in Goa where it secured around 4 per cent votes. In Uttarakhand and Uttar Pradesh, the party has contested and though it has not won, they have tried to make their organisation alive in each district of the state.

AAP’s Bhagwant Mann,  in his first public address in his home town Sangrur after winning the seat and seeing the meteoric rise of the party, observed, “No government office in the state will have the photo of the Punjab CM, but will carry a portrait of B.R. Ambedkar….We
will ensure that the youth do not have to go abroad… Within a month, you will observe changes,” he added