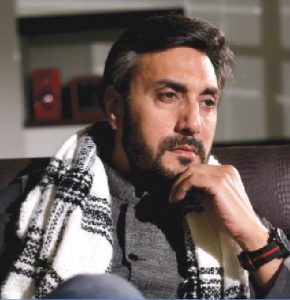 The first thing that strikes you minutes into the conversation — he is humble to a fault. You soon discover that he uses this weapon generously to disarm those around him. His mega stardom aside, the man who is adored by millions across both sides of the border and globally, hasn’t let the adulation make him conceited. For a name as renowned as Adnan Siddiqui, even a flimsy veneer of arrogance is conspicuously absent.

He reads your mind, as if on cue, and immediately puts you at ease. “Dekhiye, yeh chai ka waqt hai. Main pee raha hoon, aap bhi bana lijiye phir baat karte hain (This is tea time. I am already enjoying my cuppa. You also brew yourself one and then we’ll talk),” he nudges and few minutes later as a freewheeling discussion about everything under the sun ensues while sipping tea, you know that his humility is not a facade, that the arc lights haven’t blinded Siddiqui and his roots run deep. “My father always said that the measure of a person’s success is not by his worldly riches but whether he has his head above his shoulders. He viewed shohrat aur daulat (fame and fortune) as fleeting, and always underscored vanity as a fatal flaw. Dad knew how easy it was to lose yourself to it,” the actor says, settling into a languid tone of tête-à-tête.

When we catch up with the star, he has hit a home run with his latest show Mere Paas Tum Ho that has broken all previous records in television industry. His character Shehwar Ahmed, despite dubious undertones, has acquired critical and mass acclaim. He is also thrilled for his comeback (of sorts) in India with OTT platform Zee5 which is doing reruns of Pakistani dramas from its erstwhile channel Zindagi. Among the line up on Zee 5 are serials like Maat, Mere Qatil Mere Dildaar where he was the main protagonist and antagonist respectively, making Siddiqui a household name in India. “I am privileged to have received tremendous love from Indian audience. I was relatively unknown there when Zee launched Zindagi in 2013 but things changed soon after,” Siddiqui says as he recounts an incident when he was mobbed by fans in the by-lanes of Jama Masjid where he had gone to savour some kebabs. “It was 2016. Mere Humdum Mere Dost had just begun its telecast and I happened to visit this famous eating joint in Purani Dilli around that time. My presence there went unnoticed because I was a nobody(sic) to them, and thankfully I was able to have food in peace. Then I went to the same place again after a few weeks and I could have neither the kebabs nor peace,” he laughs heartily. “Fans were all over me the moment they recognised who I was. I had to call Boney (Kapoor) ji to send security to get me out of the restaurant.”

Mom, a crime thriller released in 2017 where he debuted as Sridevi’s husband, was the last time Siddiqui worked with an Indian production house because clamour for jingoism and over-the-top nationalism around this time following Uri and Pathankot attacks, coerced Pakistani actors to leave India. It may have been a few years since he vanished from Indian film industry, his dramas are still lapped up by Indian audience, especially women, with extreme relish. Take Haider Maqsood — the quiet, intense, pining-but-won’t- confess lover in Mere Humdum Mere Dost, for example.

Or Shehwar Ahmed — rich, flamboyant, suave, who employs wiles of charm and glib talks to seduce a middle-class housewife in Mere Paas Tum Ho. How can a home-wrecker, a villain have millions of women smitten? “I have been told by a lot of people that I am playing myself in Shehwar — the ease with which he beguiles Ayesha that she loses all sense of right and wrong and breaks her marriage. I think I have inherited the charm from my father. He had ladies eating out of his hands,” Siddiqui grins modestly, eyes dancing with mischief.

He, meanwhile, insists that Mere Paas Tum Ho is more than Shehwar as the drama marks the return of the golden era of Pakistani television when good script and powerful screenplay were the mainstay. “The exchanges between all the characters hit you hard. Each dialogue is heavy duty and forces you to think,” avers Siddiqui who digs his teeth into meaty roles irrespective of dark or grey shades they carry. An impressive repertoire of work under his belt, the 50-year-old is, hence, not the prototype of lover boy given his drop dead looks. He boldly experiments, fitting as easily into the shoes of a dutiful husband and son (Aahista Aahista) as that of a lecherous brother-in-law harassing his younger brother’s wife (Mere Qatil Mere Dildaar). “I have been in showbiz for more than three decades now but I am still greedy for good work as a newcomer. It does not matter if I have a cameo. If it’s a tightly wound story, I am all game for it.”

Siddiqui also shares his experience of working with two stellar actors of our times — Irrfan Khan and Sridevi, who, in his own words, were “thorough professionals” and “powerhouse of talent”. He co-starred with Khan in Michael Winterbottom’s A Mighty Heart that also marked his first Hollywood outing. “I was fortunate to share space with these two tremendously ingenious actors. It was a great learning curve, clichéd as it may sound, one that I would draw from forever.” His relationship with both the late stars, he tells, extended beyond shooting studios. “I became friends with Khan and Sri ma’am and her family. I used to call Irrfan saab regularly to know about his well being when he was undergoing treatment. He was so hopeful of bouncing back.” After waiting for a moment, he coyly adds how it was a dream come true to play Sridevi’s husband, she being his “childhood crush”.

The Pakistani star also shares a close bond with music director duo Sajid-Wajid. So when Wajid Ali passed away in June, “it was a huge personal loss”. “Both the brothers are like family to me. I have some very fond memories with them and their family while I was in
India shooting for Mom.”

Would he want to be part of the Indian film industry again if things between the two nations improve? “Why not?,” he says excitedly. “I understand that both the countries are embittered. At the same time, I also feel that art and cinema should transcend borders and hatred. Creativity is a potent adhesive to bring people together. Let me also tell you that nothing heals like art.” 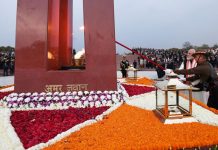