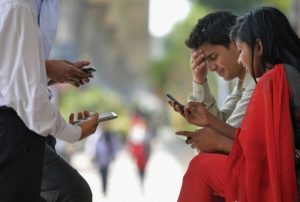 Do you check your smart-phone the first thing on waking up? Do you hear it buzzing even when it’s not? Do you experience fear, anxiety and perspiration when you suspect that you have lost your mobile phone or when its battery is just one per cent and it is going to switch off any moment? Do you feel weird without a cell-phone and become nervous when not getting messages on WhatsApp and Facebook?

Well, experts say, you could be a victim of No Mobile Phobia, the fear of having no mobile phone — Nomophobia! Surprisingly, nine out of every 10 people, aged below 30, suffer from “Nomophobia”. A study by BMC Psychiatry has identified four typical symptoms of smartphone addiction, namely, withdrawal (experiencing negative feelings when having no access to smart phones), salience (constant checking and thinking about smart phones), conflict (smartphone use interferes with family and work life), and phantom phone signals (illusory perception of a phone vibrating or ringing).

A study by King’s College London, says such addictive behaviour means that people become “panicky” or “upset” if they are denied constant access.  The youngsters also cannot control the amount of time they spend on the phone. The study warns that such addictions have “serious consequences” for mental health. The research, analysed 41 studies involving 42,000 young people in an investigation into “problematic smartphone usage”.

One in four children and young people could have problematic smartphone use, according to research that also suggests such behaviour is associated with poorer mental health. The amount of time children and teens spend using their devices has become an issue of growing concern. The experts behind the latest study said they wanted to look beyond the time young people were spending on smartphones and instead explore the type of relationship they had with such devices.

The results suggest more than 23% of young people have a dysfunctional relationship with their smartphones, and that this appears to be associated with poorer mental health. “It seems like a substantial minority of teenagers and young people from various different countries are self-reporting a pattern of behaviour that … we recognise from other addictions,” said Dr Nicola Kalk of King’s College London, co-author of the study. “The quality of the evidence is poor, but it is enough to warrant further investigation.”

Writing in the journal BMC Psychiatry, the team reported how they looked at data from 41 studies involving a total of almost 42,000 participants across Europe, Asia and America, predominately in their teens or early 20s. These studies used questionnaires to probe the prevalence of problematic smartphone use — behaviours such as being anxious when the device is not available or neglecting other activities to spend time on the smartphone.

Taken together, the team said on  average these studies suggested as many as one in four children and young people had problematic smartphone use, with girls in their late teens the most likely to report such behaviour. Subsets of the studies showed problematic smartphone use appears to be more common in wealthier individuals, something the team said might be driven by early adopters of new technology, as well as in those with low self-esteem and greater levels of loneliness. It was also found to be more common among those with Internet addiction, addiction to Facebook, compulsive shopping and higher levels of drinking and cigarette smoking.

Among the studies that probed mental health, the results suggested people with problematic smartphone use were also more likely to have depression — for which the odds were more than three times worse — anxiety, feelings of stress and poor sleep as well as poorer educational attainment.  Kalk said further studies were needed to explore if these behaviours were hard to break, or cause harm — other key features of an addiction.

The authors argued that the availability and pervasiveness of smart phones in everyday life meant problematic use of the devices posed a different and “arguably much bigger public health problem” than substances of abuse or internet gaming. Kalk said the team were now looking at whether smartphones were just delivering addictive content, or whether there was something inherently addictive about using such devices. She added that tracking use, a common feature on phones, was helpful. “Once you start monitoring your use, you are engaging with its impact and how much time it is taking and what you are not doing because you are spending time on your phone,” she said.

“It has been shown previously that smartphone effects are not a one-way street, but that mood can impact the amount of smartphone use as well, making these correlations bidirectional in nature,” she said.

It is a fact of modern day life that smartphones dominate people’s lives and interests due to their increased affordability and functionality. However, the negative aspects of smartphone use, such as smartphone addiction, have recently been brought up.

Smart phones are a prominent source of addiction because they allow people to install various applications and perform numerous compelling activities like mobile Internet and mobile instant messaging that are in line with their personal needs and interests. When individuals obtain favourable outcomes from smartphone use, they become addicted. The study showed that individuals that use smart phones are more likely to develop device dependency compared with people who use traditional mobile phones. So, are we becoming too hooked to your smart phone? If yes, take care!