After taking into account the global bidding process, procedures followed and the Central Vigilance Commission (CVC) guidelines, an empowered committee headed by Chief Secretary Jiji Thompson decided to recommend the lone bid of Adani to the board of Vizhinjam International Seaport Limited (VISL), a special purpose vehicle set up to execute the project. With everything falling in place, the Chandy government quickly awarded the project to Adani.
Meanwhile, Elias John, Vizhinjam Motherport Action Council (VMAC) president, said that the fresh allegation would only delay the implementation of the port project. “For the last 24 years, we have been fighting for the cause. Successive state governments have failed to realise the dream of the people. What we need is political will to make the port a reality.”
Chandy denied allegations of malpractices by saying that the government had nothing to hide and was ready to clarify all issues raised by the opposition. He said it was strange that the CPM was alleging corruption amounting to Rs 6,000 crore for a project that cost Rs 6,700 crore.
Meanwhile, the VISL has clarified that adequate measures had been taken to protect the state’s interest in the revenue share, port estate development, maintenance, and dredging. They said that neither the bidder nor the VISL had done anything against the accepted norms while submitting or recommending the bid for the project. The maintenance and dredging would be the responsibility of the port operator. The port operator would be given the licence to build and operate the port for 40 years, and this included the four years for its construction. However, in the earlier version, the port was to be given on a 30-year lease after construction. The Vizhinjam port, once completed, is expected to dock ships with a capacity to handle upto 18,000 TEU (twenty-foot equivalent units). The project is supposed to take shape on a spread-over area of about 140 hectares of land.
The project, which got environmental clearance in 2013, requires massive displacements and therefore it is likely to affect the fishing community in particular. The government has fixed a compensation of Rs 90 crore for all those who get affected by the seaport project. The UDF government, which is mired in various controversies, has now entered its final year. Critics within the ruling front allege that the government has nothing to show before the state goes to poll early next year and if the Vizhinjam project takes off after more than two decades of delay, the ruling front can easily cash in on the same in the next election. However, with Adani’s entry, the government would find it very difficult to convince the opposition.
adarsh@tehelka.com 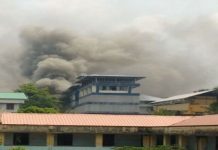