Chakraborty was welcomed into the fold by BJP national general secretary Kailash Vijayvargiya and state president Dilip Ghosh among others.

The National Award-winning actor, after being handed the saffron party flag by Ghosh, said he had always wanted to work for the underprivileged, and the saffron camp has given him a platform to fulfil his aspiration.

He also asserted that he was proud to be a Bengali.

‘I always wanted to do something big in life, but had never dreamt of being a part of such a huge rally which is to be addressed by world’s most popular leader Narendra Modi. I wished to work for the poorer sections of our society, and that wish will now be fulfilled,’ he said.

Amid huge cheers from supporters, Chakraborty, borrowing a dialogue from one of his films, said, ‘Ami joldhorao noi, bele borao noi… ami ekta cobra, ek chobol-ei chobi (Don’t mistake me for a harmless snake, I am a cobra, can kill people in one bite),’ he said.

Last month, RSS chief Mohan Bhagwat met the actor at his Mumbai bungalow over breakfast, setting off speculation that he might join the BJP.

Chakraborty, who earlier maintained close ties with Mamata Banerjee, was nominated to the Rajya Sabha by the TMC in 2014. He, however, quit the Upper House seat in 2016 citing health reasons, after his name surfaced in the Saradha ponzi scam, media reports said. 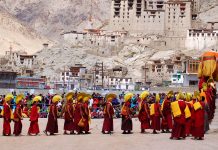