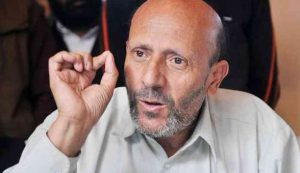 Controversial J&K politician and former legislator Engineer Rasheed on Thursday has urged the Prime Minister Narendra Modi to revise his security-centric policy on Kashmir and act like a statesman to resolve the long running problem in the state.

“Tackle the political issue in Kashmir politically. Don’t rule Kashmir through the barrel of the gun. All Kashmiris are well wishers of India and not its enemy,” Engineer Rasheed said while addressing a press conference in Srinagar.

He said massive  mandate received by the prime minister had provided him an opportunity to behave like a statesman and start talking about Kashmir.

“No one can suppress the voices of the common people in Kashmir by exclusive military measures”.

Rashid, who lost the Parliament election from Baramulla, also urged the PM Modi  to respond to Pakistan premier Imran Khan’s overtures for dialogue. He, however, called on both the countries “not to take Kashmiris for granted”.