Indian police, often, may be rightly, is accused of indulging in extra-constitutional authority, whether it uses canes or teargases against protestors, gleefully encounters the rape accused with a killing instinct in Hyderabad or drunk police constable kills of an IT professional in Lucknow. These incidents, however, appear insignificant, if compared with what is being witnessed worldwide from USA, West Asia and Hong Kong. The world is under the spell of the dehumanization of mankind, whether a serving police officer in US suffocates his black colleague, common citizens in Lahore having little access to medical care, hit by the COVID-19 or the ongoing Chinese atrocities against the pro-democracy protestors in Hong Kong. There is no end to violence from Iraq to Afghanistan. 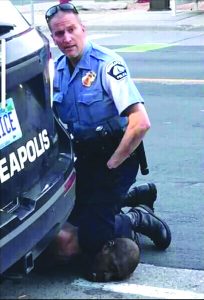 The on-going violence and the flare-up of racial riots from the New York City to Chicago show the vulnerability of mankind irrespective whether it is the developed or a developing country. The street-smart politicians, only focused on vote bank, have made the situation quite grim in USA, where the presidential election is scheduled by the end of the year. Amidst these troubled times, the bold decision of the Twitter management to delete the provocative tweet of President Donald Trump, indeed, is a silver lining. In spite of the political efforts to have polarization before the presidential polls, the American civil society not only disapproves this political dehumanization, it has shown courage to oppose the “opportunistic stand” of the president.

In India, the civil society members too have tried to assert in such situations, but could not rally around adequate support for those, especially the policemen, who dared their respective political bosses known for seeking police escorts to show their power to their followers, or triggering off caste or communal riots for diverting the voters from basic issues related to good governance and transparency in the decision-making. On the other hand, the civil society in USA has displayed courage accompanied by the assertive mood of media has rejected the racist approach. It could, perhaps, be called the best tribute to the Statue of Liberty- the symbol of free world.

In spite of the discriminatory noises from the top, the White House, the prompt arrest of the accused Derek Chauvin, a white policeman, for murdering George Floyd, a black also a police man, shows that the system is neutral and resists any racial prejudices, if any.  Hours before the eruption of the racial riots, Chauvin’s wife, Kelly, decides to dissolve their marriage and consoles the victim’s family devastated by the tragedy. Meanwhile, the Hennepin County Attorney Mike Freeman has charged Chauvin for the third-degree manslaughter that ensures jail-term for 25 years to the accused. In India, a prominent member of the ruling party violates a young student, gets the witnesses killed, and the men in uniform shamelessly try to protect the criminal. Even get the victim, a young girl, arrested. In spite of the Supreme Court’s intervention, the accused is given bail.

The President Trump’s provocative statement and his advice to the state governors to be “tough with the black rioters”, the Houston Police chief Art Acevedo dares him and asks to keep his mouth shut. He tells the president, “Because that’s the basic tenet of leadership and we need leadership now more than ever.. and it’s time to be presidential and not try to be like on The Apprentice. This is not Hollywood, this is real life and real lives at risk,”.

The assertion of the US system of justice, despite the expression of racial prejudices, is expected to stop the countrywide protests. It tries to reduce the brutalities, but in India, the police may look less brutal, but it is too subservient to the political bosses. The dearth of courts and the corruption-infested police system fails to ensure fair justice. There are thousands of under-trials in India. In most of the cases, the police investigations fail to indict the under-trials with adequate evidences, but invokes draconian laws to keep them behind the bars. The unprofessional approach of the Indian police has political patronage. In spite of the Supreme Court’s directive to the states for a new police law, the state governments, irrespective of their party affiliations, especially the bigger states in India, have so far not enacted new law, except a few states, to replace the colonial police legislation of 1861 used to subjugate people.

In USA, there is a growing resistance against the political design to divide voters on racial lines. It appears that the society is much more mature than the politicians. A frustrated president seeking re-election by the end of this year, appears to have shifted his focus from the America First to the Whiteman First. It is rather surprising that undeterred by the deletion of his provocative tweet, he could tell state governors in a video conference “You have to dominate. If you don’t dominate, you’re wasting your time. They’re going to run over you. You’re going to look like a bunch of jerks. You have to dominate.”  He has all praise for the National Guard’s response in Minneapolis, saying it “cut through (protesters) like butter.”

The USA is experiencing the most widespread racial turbulence and civil unrest since civil rights icon, Dr. Martin Luther King, was assassinated in 1968. The reports are pouring in of shootings, lootings and vandalism in metropolises across USA. It is estimated that at least 4,400 people, mostly blacks, have been arrested.

Amidst, the racial riots in USA, China under President Xi Jinping is going ahead with the paradigm changes in the governance of Hong Kong, though they violate the international agreements and assurances. The world is carefully watching the Chinese action in Hong Kong, a world center for trade and business. However, it finds helpless due to the eruption of violence in USA. The pro-democracy volunteers are apprehensive about the possibility of a repeat of the Tiananmen Square tragedy. On June 4, 1989, the Chinese troops had stormed the Tiananmen Square in Beijing used tanks and automatic guns butchering young protestors asking for democratic rights. It is estimated that over 10,000 pro-democracy demonstrators were massacred. The official Chinese figure, however, is that 200 civilians and a several dozen security personnel had died in Beijing following the suppression of “counter-revolutionary riots”.

It appears that China is convinced that the US-led west would just make some noises protesting his decision, but it would be able to implement its agenda in the city. It may be recollected that during the 70s, the Chinese had rejected the British proposed of governing Hong Kong, during the post 1997 years. The Chinese government under its supreme leader, Deng, had negotiated a deal in 1984 with the UK that the British territory will be transferred to China in 1997, but China will retain its democratic systems, civil liberties and free economy for 50 years after the handover.

Earlier, the USA and the other democratic countries ignored the Tiananmen Square massacre. In 1998, the US president, Bill Clinton, visited Beijing and appeared in the square with the Chinese leaders. Next year, he welcomed China in the World Trade Organization (WTO).

The year 2020 appears to be much more challenging for the world. The pandemic is being followed by the race riots and those who mastermind such things are yet to be booked.