The Supreme Court on March 19 agreed to hear a plea challenging the acquittal of dentist couple Rajesh and Nupur Talwar in the Aarushi-Hemraj murder case.

A bench headed by Justice Ranjan Gogoi has issued a notice to Rajesh and Nupur Talwar, who were acquitted by the Allahabad High Court in the mysterious twin murder case in October last year.

The petition was filed by Hemraj’s wife Khumkala Banjade who challenged the October 12, 2017, order of the High Court. Later the CBI also filed an appeal against the acquittal of Talwars.

In October last, the Allahabad High Court had passed the verdict and pointed out many loopholes in the CBI’s investigation after which the Talwars were released from Dasna jail in Ghaziabad.

In yet unresolved case, on May 16, 2008 fourteen-year-old Aarushi was found dead inside her room at the Talwars’ Noida residence. A day later, their servant Hemraj was also found dead on the terrace of the house 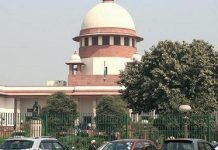