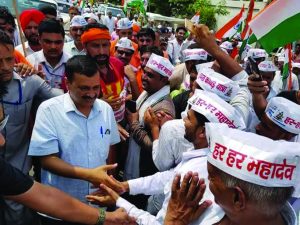 It would be the first time for AAP when they will contest elections in Haryana next year. Four years ago, the party successfully contested parliamentary polls in neighbouring Punjab and won four seats. Last year, AAP also contested the assembly polls in Punjab and tasted success. AAP emerged as the main opposition party in the state although at one time it looked like it would come to power in the state.

AAP also ventured unsuccessfully in Goa elections. But for now, the party is only concentrating in Haryana where it spots a big chance. With the Indian National Lok Dal out of power for about 15 years and Congress struggling to come to grip after ruling Haryana for 10 years, AAP feels it has the best chance in 2019 to come to power if the anti-incumbency factor grows against the ruling BJP.

In the name of establishing ‘bhaichara’ (brotherhood) among the Haryanvis, AAP is making sincere efforts to reach out to the people. One such move of the party was visible when it undertook a yatra campaign from Haridwar to Rohtak in Haryana from August 1 to 9 carrying the pious Gangajal and distributing it to the leaders of various parties after the end of the yatra.

AAP aptly named its innovative move ‘Bhaichara Kanwar Yatra’. The yatra was led by AAP president in Haryana, Naveen Jaihind. A group of AAP volunteers began the Bhaichara yatra from Haridwar on August 1 during the Holy Shravan month. On its way, it passed through Panchkula, Chandigarh, Ambala, Kaithal and finally ended at Rohtak.

Talking to Tehelka, Naveen Jaihind said all the AAP volunteers first took a dip in the holy Ganges before embarking upon the yatra. The volunteers then began a foot march carrying the kanwar. Jaihind said they plan to distribute Gangajal to various people, including Haryana Chief Minister, his cabinet ministers, MLAs, opposition leaders to request them to ensure ‘bhaichara’ (brotherhood) in the state.

“The political leaders always speak ill of others. This Gangajal will remind them of their duties and responsibilities,” said Naveen Jaihind.

The Gangajal given to the BJP leaders will remind them of their forgotten promises. The BJP promised development, jobs to the youth, law and order and maintaining peace and brotherhood in the state, but it has miserably failed on all these fronts. It is, therefore, time these leaders realise how they have failed the people, he said.

Jaihind went on to say that it was not just the BJP which had failed the people. The Indian National Lok Dal (INLD) and the Congress party were equally to blame for this. There is leadership fight in the Congress. Both senior Congress leader and former Chief Minister of Haryana, Bhupinder Singh Hooda and Haryana Congress president Ashok Tanwar have been at loggerheads with each other for long. Both the leaders are also holding yatras in their own capacity. While Bhupinder Singh Hooda has been holding his Jan kranti yatra on a chariot, Tanwar has been taking out his ‘Cycle Rally’ to gain attention and build a vote base.

He even said said both leaders have personal interest in their mind. It is most unfortunate that they do not think about the welfare of the people. Their only objective is to grab the Chief Minister’s post if their respective parties come to power in Haryana. But the AAP aims to create brotherhood among various sections of people. “We want to restablish the peace and harmony among the 36 biradari disturbed by various events in the past including the violent agitations,’’ said Jaihind.

Highlighting on the casteism in the state, he was of the opinion that the BJP government at the centre and in Haryana has only promoted casteism and religious bigotry during its four years’ reign and disturbed the peace and brotherhood among different communities both in the state and the rest of the country. In the name of casteism riots are taking place everywhere and the BJP and other parties are taking full advantage of the disturbed situation. “It was AAP which launched a ‘Meri Jati Hindustani’ campaign in Rohtak for establishing communal peace and harmony,’’ said Jaihind.

The AAP president said they will also give the Gangajal to Jat leader and president of the All India Jat Andolan Sangharsh Samiti (AIJASS) Yashpal Malik and BJP’s MP from Kurukshetra Rajkumar Saini over their utterances which tended to disturb the communal peace in the state time and again.

As per the Panchkula district head of AAP, Yogeshwar Sharma, Aam Aadmi Party has always focused on the wellbeing of the people. “We do not compromise with our principles,’’ he said.

Sharma said the `Bhaichara kanwar yatra’ helped create a goodwill for the AAP in both the rural and the urban belt of Haryana. “It created curiosity and a positive vibe among the people. We are also carrying out a membership drive in the state. In this regard I have held several meetings in Panchkula and Kalka, said Sharma.

However, commenting on the `Bhaichara Kanwar Yatra’ of the AAP, Pawan Jain, former Media Congress of the Haryana Congress said AAP leaders always indulge in dramas. “AAP does not have a base in Haryana. They try various tactics to influence people but no one ever takes them seriously. The Congress party under Bhupinder Singh Hooda will form the government after next elections in Haryana. People are fed up with the BJP rule in Haryana based on falsehood. The BJP government has failed on all fronts. People of the state will vote it out next time,’’ said Pawan Jain.

But senior BJP leader and Health Minister of Haryana, Anil Vij said BJP has fulfilled all the expectations of the people who voted it to power four years ago. “The opposition will not prove any match to the BJP,” he said.