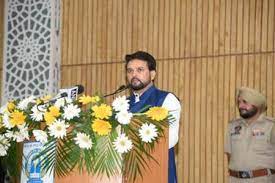 Union Minister of Information & Broadcasting and Sports & Youth Affairs Anurag Thakur alleged that AAP led Governments in Delhi as well as in Punjab were indulging in corrupt practice.

Addressing the press conference here today, he said, “  A news about a big leader surfaced who was allegedly found in state of drunken when he boarded the plane and subsequently he was deplaned  is  a matter of deep concern if it is true and correct.  He said that truth would come in the near future as to why Chief Minister along with his official staff of Punjab was forced to offload the plane in foreign country”.

He said that in Delhi AAP Government was already facing serious allegations about its liquor policy and at the same time news surfaced about its big leader that he was  deplaned on Saturday night because of his alleged “inebriated“ condition, was matter of deep concern for the nation. Moreover, where the State Health minister was already behind the bar in that circumstances all these things raises many questions, he quipped.

Castigating the AAP Government in Punjab while answering about the alleged operation Lotus, he said, “BJP don’t need to topple any Government especially where just after the three months of formation of Government, AAP lost its Parliament seat in Punjab that depicts the plight of AAP in the state as people here no more like AAP Government. This Government was already fallen in the eyes of people and no need for any political party to topple them”.

He said that if BJP can form and repeat its government in Haryana two times in a row, Uttar Pradesh two times, three times Goa, even formed Government in Uttarkhand and Manipur and some other states, so why not BJP could form Government in Punjab with absolute majority in the coming time, equipped.

Talking about Himachal Pradesh, he said that majority AAP leaders have already left the party and joined BJP, so with all such political developments AAP was trembled.

He said issues like drug, crime planned from the jails of Punjab and mushrooming of gangsters on the soil of Punjab was a matter of deep concern and here Punjab police needed hard work to eradicate such menace, since the state has already experienced bad days of militancy. He said for all such reasons investors were scared to invest in Punjab.

Chief guest of the day,  Anurag Thakur said, “We have spent close to INR 2758 crores on developing sporting infrastructure wherein we have sanctioned 300 projects across the nation”. He said that we are increasing our focus on Women Athletes – we are conducting dedicated Khelo India Women’s Leagues across nine disciplines – hockey, archery, weightlifting, cycling, boxing, swimming, wrestling, volleyball & Judo – More than 23,000 women athletes will participate in these competitions.