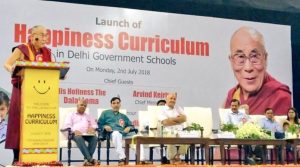 The Aam Aadmi Party government on July 2 launched its ‘Happiness Curriculum’ for nursery to class 8 students studying in government-run schools in Delhi.

Dalai Lama graced the occasion and said that “India can lead the world by uniting the modern and ancient knowledge and help it overcome negative emotions of the mankind.”

“Modern education focuses on material values and has nothing to offer regarding inner peace. Only India has the ability to combine modern education with ancient knowledge which is necessary for fulfillment of human emotions,” Dalai Lama said.

During the launch Delhi Chief Minister Arvind Kejriwal said “‘Happiness curriculum’ launched today as the third stage of reforms in education sector initiated by his government after focusing on infrastructure development and motivation of teachers at the government schools.”

Under the initiative, students will daily attend a 45 minutes ‘happiness period’ and will learn art of meditation, moral values, patriotism, among other activities. For nursery and KG students, the classes will be held twice a week.

Under the initiative, teachers will observe and maintain the diary of the day-to-day behavior of the children, their communication content and thinking abilities. Teachers will also talk about feelings of students on issues such as peer pressure, exam pressure, the expectation from family and bullying etc.

“The curriculum is signed and prepared by a team of 40 Delhi government teachers, educators and volunteers over a period of six months, said Manish Sisodia, deputy chief minister and in charge of Education department of Delhi government.

He added that 10 lakh students and 50,000 teachers will participate in these classes every day.

Kejriwal added, “Education is our topmost priorities. The Centre and other state governments should give one year, focusing on education at a war footing.”