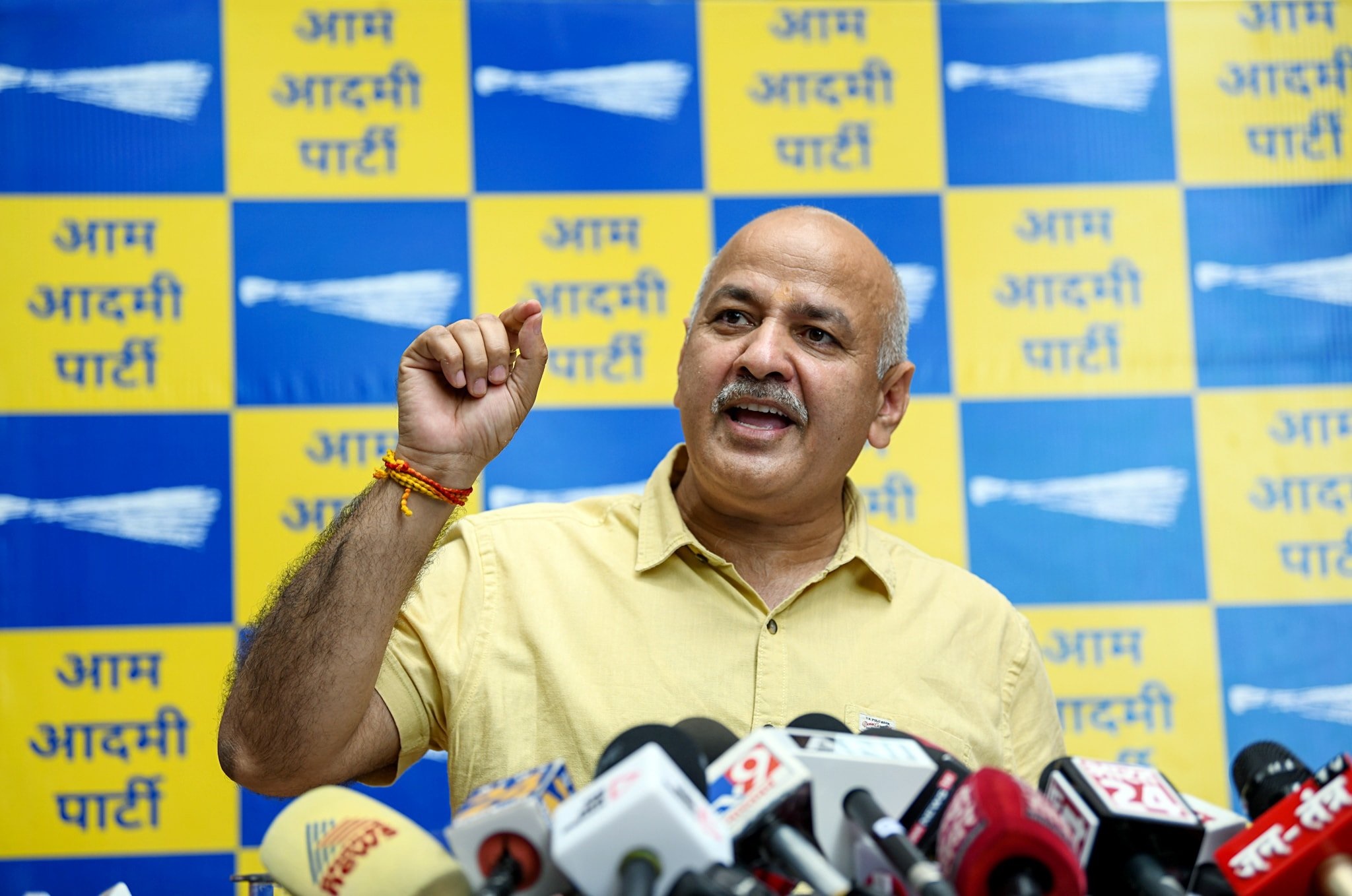 The case against Delhi deputy CM Manish Sisodia for alleged corruption in the implementation of the Delhi excise policy has sparked an AAP-BJP spat. With Gujarat and HP going to polls later this year, the issue has assumed political overtones, reports Rajesh Moudgil

In the CBI case registered against Delhi deputy chief minister Manish Sisodia, the Aam Aadmi Party (AAP) sees a blatant misuse of Central agencies by ruling BJP which, it alleges, is baffled because of the growing popularity of AAP supremo and Delhi chief minister Arvind Kejriwal. The AAP which is going full throttle in poll-bound Gujarat and Himachal Pradesh has been showcasing its landslide win in Punjab in February this year to drive its point home.

Even as the BJP trashes AAP’s claim, questions are being asked about the timing of the CBI case against Sisodia at a time when the AAP has been revving up its campaign in two poll-bound states and the party leaders are even claiming that it is Kejriwal who is being seen as alternative to prime minister Narendra Modi in 2024 general elections.

It was on August 19 that the CBI conducted raids at about 30 locations including the residence of Sisodia who also holds the excise portfolio, in connection with the alleged corruption in the implementation of the Delhi excise policy 2021-2022 and claimed to have seized several documents, data dump and electronic gadgets during the raids.

The CBI’s first information report (FIR) says Sisodia and about 14 other accused took decisions pertaining to the excise policy allegedly without the approval of competent authority allegedly with an intention to give undue favours to some licensees.

The FIR was said to have been based on a reference from Delhi’s Lieutenant Governor V K Saxena, who recommended a CBI probe into the alleged irregularities in implementation of the said excise policy. According to media reports, even a report by the Delhi chief secretary in July had also allegedly showed prima facie violations of business and excise rules.

The CBI case has triggered a fierce blame game with AAP tearing into the BJP-led Central government alleging blatant misuse of Central agencies like CBI and enforcement directorate (ED) and the BJP dismissing AAP’s charge in back-to-back pressers for the past few days.

Taking on BJP leadership, Sisodia alleged the CBI case against him was the BJP’s attempt to stop the developmental schemes of Delhi Chief Minister Arvind Kejriwal whose work in the fields of education and health was being lauded not only in the country but also in the world. 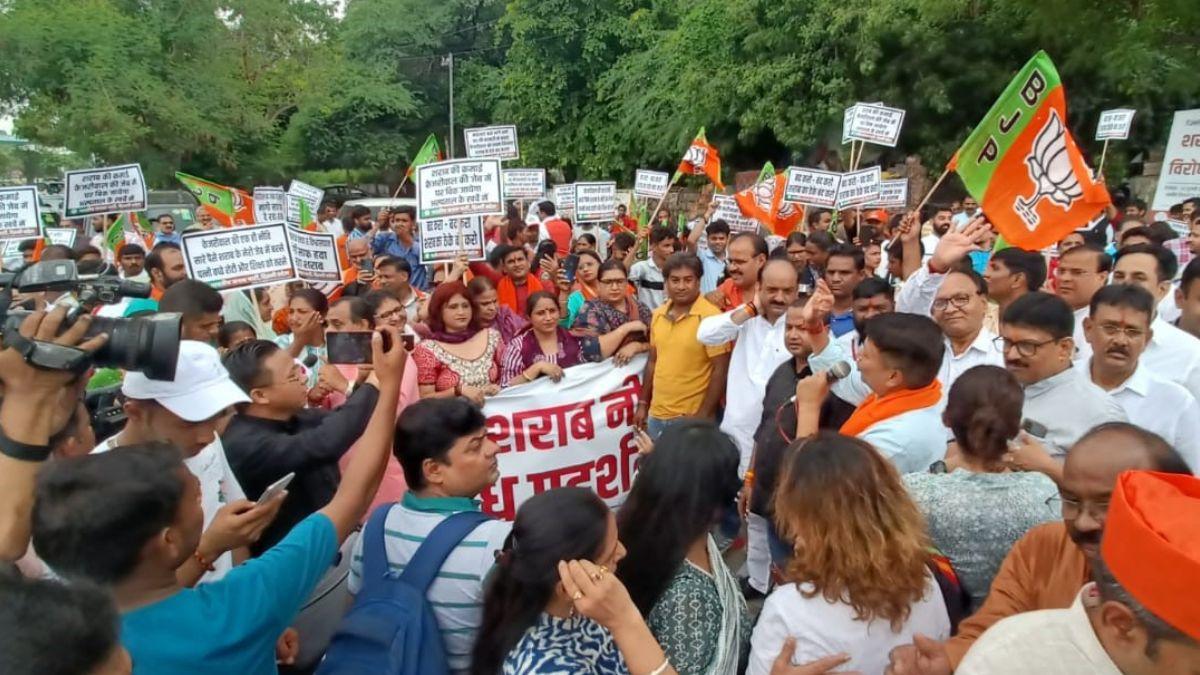 Sisodia went on to add that Kejriwal had emerged as a national option and that the 2024 Lok Sabha polls would be between prime minister Narendra Modi and Kejriwal. He alleged that while Kejriwal worked for the common man, Modi worked only for the rich.

Joining the tirade against BJP, the AAP leader Raghav Chadha also said that Kejriwal’s growing popularity had rattled the Narendra Modi government, which was resorting to the misuse of the central agencies like CBI to finish the AAP leaders. The BJP wanted to destroy the AAP’s models of health and education, he alleged.

The AAP MP, Sanjay Singh also claimed that four of the AAP MLAs had been even offered Rs 20 crore each to join the BJP. Talking to newspersons, the AAP’s national spokesperson and Rajya Sabha MP, Singh further alleged that the BJP had threatened these four MLAs  that if they did not switch sides, they would also face CBI, ED and false cases.

Trashing the AAP’s accusations, the BJP spokesperson Sambit Patra lashed out at Sisodia alleging that the latter did not have an escape route in the case as there was evidence that he indulged in corruption. Patra alleged that the Delhi government ignored recommendations of an expert committee set up to bring about reforms in the liquor trade in Delhi. He told newspersons that the desperation was evident in the AAP over the past few days which showed that the party was entangled in this case and was only trying to deflect BJP’s questions over the same.

He held that the excise committee had recommended that the wholesale business should be kept with the government and retail business should not be given to private companies while the Delhi government gave wholesale business to private players without tender or public notice. The committee had held that giving retail to private companies and not individuals would lead to cartelisation, he said and added that these recommendations were also ignored and retail was given to the liquor mafia and even liquor manufacturers were brought into retail and the blacklisted companies too were given licenses. He further alleged that the dry days in the national capital were also reduced to three from 21.

On the question if the BJP had tried to give money to four AAP MLAs to shift loyalty, Patra dared AAP to reveal the names of people who approached these four AAP legislators. Notably, even Sisodia had claimed that he was offered the CM’s post by the BJP and closure of all cases if he would leave AAP and join BJP.

Joining Patra, the BJP spokesperson Sudhanshu Trivedi and MP Parvesh Verma also took on AAP and held that the expert committee had recommended that the Karnataka model should be adopted in the excise policy in which the wholesale trade would be done by the government. The committee had said that more than one license could not be given to a particular person. It was also alleged that the committee was against opening liquor shops in villages and colonies where there was no commercial market, but the Delhi government ignored all these suggestions.

Meanwhile, the Congress too came out in open to attack AAP on the issue. Delhi Congress workers under the leadership of state party president Anil Chaudhary held a protest demanding Sisodia’s resignation.

Former Delhi chief minister Sheila Dixit’s son Sandeep Dikshit who was also present at the protest alleged that Kejriwal used to divert funds from the central government under the guise of NGOs.

Congress leader Alka Lamba also slammed AAP and targeted Kejriwal over the CBI raids at the residence of Sisodia. She asked if AAP was honest then why Satyendra Jain, the Delhi health minister was in custody for the last two months and no AAP worker and not even Arvind Kejriwal had come out on the road against his custody.