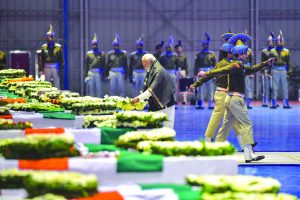 Prime Minister Narendra Modi paid tributes on February 14, 2020 to the brave martyrs who lost their lives in the gruesome Pulwama attack last year on this date. In a tweet, he said, the martyrs “were exceptional individuals who devoted their lives to serving and protecting our nation. India will never forget their martyrdom”.

Union Minister for Defense Rajnath Singh said India would never forget the sacrifice of our martyrs. He said India as a nation was committed to continue the fight against terrorism.

To commemorate martyrdom of 40 CPPF jawans who lost their lives in a suicide bomber attack in Pulwama, J&K, on February 14 last year, a memorial was inaugurated at the district’s Lethpora camp on February 14,2020. The memorial bears the names of all 40 martyrs along with their pictures. The CRPF memorial will also carry the moto of the Central Reserve Police Force (CRPF) — ‘Seva and Nishtha’ (Service and Loyalty).

It was around 3:00 pm on this day, last year, when a Jaish-e-Mohammad (JeM) terrorist rammed a vehicle carrying explosives into the Central Reserve Police Force (CPRF) convoy on Srinagar-Jammu national highway. The day was February 14, 2019 when 40 CRPF jawans were killed after a suicide bomber attacked their convoy on the Srinagar-Jammu highway located in Pulwama, Jammu and Kashmir.

The attack was the worst and the most gruesome-ever terrorist attack in Jammu and Kashmir since the spiral of violence and extremism in 1989. The terrorist who took the responsibility for this attack belonged to Jaish-e-Mohammad. The Pakistan-based terror outfit also made and shared a video clip of the suicide bomber. The terror outfit headed by Maulana Masood Azhar also carried out the Parliament attack in 2001 and also the attack on army camps in Uri in 2016.

Tensions flared up between India and Pakistan after the convoy of 78 buses, in which around 2500 CRPF personnel were travelling from Jammu to Srinagar, came under attack.

Nationwide protests erupted against the dastardly terror attack even as the country bid goodbye to its bravehearts. Leaders across the party lines and civil society condemned the attack and called for an appropriate response.

“I feel the same fire in my heart that’s raging inside you,” Prime Minister Narendra Modi would declare on February 17, days after the attack took place. A day before, he had said that “all tears will be avenged” and the armed forces have been given “full freedom to decide the place, time, intensity and nature of the retaliation against the enemy”.

United Nations and several countries from across the globe condemned the Pulwama terror attack and extended their support to India in the fight against terrorism. China, also backed the United Nations Security Council (UNSC) resolution on the “heinous and cowardly” Pulwama terror attack that was unanimously adopted by permanent and non-permanent member countries of the global body.

Following the dastardly attack, India had launched extensive diplomatic efforts to get JeM chief Masood Azhar designated as a global terrorist, which finally became a reality on May 1 when China lifted its technical hold on a proposal introduced by the US, the UK, and France in the 1267 Committee of the UN Security Council.

Around 12 days after the terror attack, in the wee hours of February 26, Indian Air Force jets bombed the JeM camp in Balakot, in Pakistan’s Khyber Pakhtunkhwa. The then Foreign Secretary would say in a press conference later in the day “In an intelligence-led operation in the early hours of today (Feb 26), India struck the biggest training camp of JeM in Balakot. In this operation, a very large number of JeM terrorists, trainers, senior commanders and groups of jihadis who were being trained for fidayeen action were eliminated. This facility at Balakot was headed by Maulana Yousuf Azhar (alias Ustad Ghouri), the brother-in-law of Masood Azhar, Chief of JeM.”

A day later on February 27, IAF foiled an attempt by PAF to strike at military installations in Jammu and Kashmir. In the aerial skirmish, Wing Commander Abhinandan Varthaman piloting a MiG-21 Bison aircraft shot down a much-advanced F-16 of PAF.

However, his aircraft was also hit and upon ejection, his parachute landed in PoK, where he was taken captive by Pakistani Army. Under international pressure, Pakistan released the IAF pilot two days later, which returned to his country to a hero’s welcome.

After the attack last year, tensions had flared up between India and Pakistan as protests erupted across India, seeking revenge for the dastardly attack. As leaders across the party lines condemned the terror attack and called for a response, Prime Minister Narendra Modi had told the countrymen he felt the same “fire” in his “heart” that’s raging inside people of India.

He also said all tears would be “avenged” and gave the Army “full freedom to decide the place, time, intensity and nature of the retaliation”. Following the attack, India launched airstrikes on Jaish camps in Balakot in Pakistan’s Khyber Pakhtunkhwa region on February 26. A day later, IAF had foiled an attempt by Pakistani Air Force to strike at military installations in J&K, which led to a major dogfight and aerial skirmish between IAF and PAF fighters.

Wing Commander Abhinandan Varthaman who was flying MIG-21 Bison fighter aircraft shot down Pakistan’s much-advanced F-16. After his own aircraft was hit, he ejected from it and landed in PoK, where he was captured by the Pakistani Army. In just two days, under pressure from India and the international community, Pakistan had to release him, and the IAF pilot was given a hero’s welcome back home. As per the Army, all conspirators behind the terror attack in Pulwama have been killed in the past one year, with the last one being Qari Yasir, the self-styled chief of Jaish-e-Mohammad terror group, who was killed last month.

There are fresh inputs that indicate that there will be a spike in terror attacks after February. Reports emanating from across the borders suggest that radicalization and recruitment is taking place in the absolute interiors, especially in south Kashmir or Srinagar’s Batamaloo and Nowhatta and some patches in Baramulla.

The Pulwama terror attack had revealed a colossal intelligence lapse. While the JeM suicide bomber began his groundwork a year ago, his activities raised an alarm among intelligence units in the valley. Despite adequate intelligence that suggested a strike, a convoy of 78 vehicles carrying more than 2,500 CRPF personnel was rolled out from Jammu to Srinagar.

Little doubt that on the first anniversary of the Pulwama terror attack that killed 40 CRPF personnel on February 14 last year, the Congress launched a scathing attack on the ruling BJP asking who benefitted the most from the attack.

Former party president Rahul Gandhi led the offensive with a tweet featuring a series of questions about the attack, which led to the Indian Air Force striking deep in Pakistan to dismantle terror networks.

“As we remember our 40 CRPF martyrs in the Pulwama attack, let us ask: Who benefitted the most from the attack? What is the outcome of the inquiry into the attack? Who in the BJP
government has yet been held accountable for the security lapses that allowed the attack? Entire nation pays homage to martyrs of Pulwama!” Rahul Gandhi said in reference to the BJP riding to power in the 2019 General Election.

In a sharp reaction to the Congress attack, the BJP hit back at Rahul Gandhi, claiming that he had given a “clean chit” to Pakistan on a day the nation commemorated the 40 CRPF men martyred a year ago. The bitter war of words saw the ruling party brand him a “known sympathiser” of terror groups Lashkar-e-Toiba and Jaish-e-Mohammed. “Shame on you,” said BJP spokesperson GVL Narasimha Rao.

“When nation is paying homage to martyrs of dastardly Pulwama attack, Rahul Gandhi, a known sympathiser of LeT and Jaish-e-Mohammed, chooses to target not just the government but security forces as well. Rahul will never question the real culprit, Pakistan,” Rao said.

Union minister Mukhtar Abbas Naqvi called Congress a “history-sheeter” party. “Congress is a history-sheeter party who always politicised issues related to national and security issues. They are questioning India’s surgical and Balakot strikes on Pakistan to wipe out terrorists,” Naqvi told. He also said that Congress “speaks the language of Pakistan.” 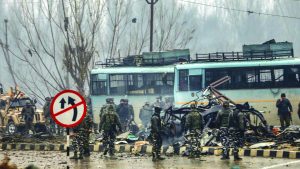 Congress spokesperson, Jaiveer Shergill commented that it has been one year that the Pulwama attack happened and the Indian National Congress pays homage and salutes the bravery of the soldiers who sacrificed their life for the nation. It is a well-known fact that Pakistan was behind Pulwama attack but it is a well kept secret by the BJP how come such a massive intelligence failure happened on the soil of India leading to Pulwama attack.

He questioned as to how did the IED in such a big quantity enter the soil of India, enter the State of Jammu & Kashmir and who within the Indian administration is responsible, accountable and answerable for such a massive intelligence failure? Why were the jawans not air lifted during their movement which was anyway a protocol? What is the role of DSP Devinder Singh and on whose directions he was he working? How come a vehicle carrying such a big explosive checkmates so-many ‘nakaas’, so many police stops and went in and attacked our soldiers, taking lives of 40 of jawans?

Congress leader Shashi Tharoor demanded that the results of the Pulwama attack investigation be made public, “Why has the report of the Pulwama attack not been made public?” he tweeted. On its official handle, the Congress said that the government has completely forgotten about the Pulwama martyrs’ families. “After the election speeches and photo-ops, the BJP govt has completely forgotten about the families of the martyrs,” the Congress said on Twitter.

While answers to such questions are still evasive, one finds that one year after the attack, there has been a complete change in the vigil strategy of the security forces. 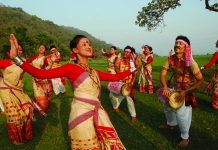 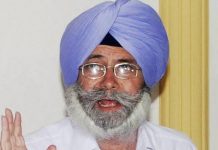