On 24th March 2020 the 21-day lockdown was announced by the government to control the corona virus outbreak – a densely populated nation without any prior warning or any substantial plan While, it was met with approval by experts and health professionals, the Bollywood celebrities hailed the decision asking the fans to follow the government directives. But, the lockdown proved catastrophic for India’s millions of rural migrant and daily wage workers. Migrant workers of rural India have been among the worst hit by the lockdown. The speed of the transportation shutdown meant that India’s millions of internal migrants had no time to return back to their home. 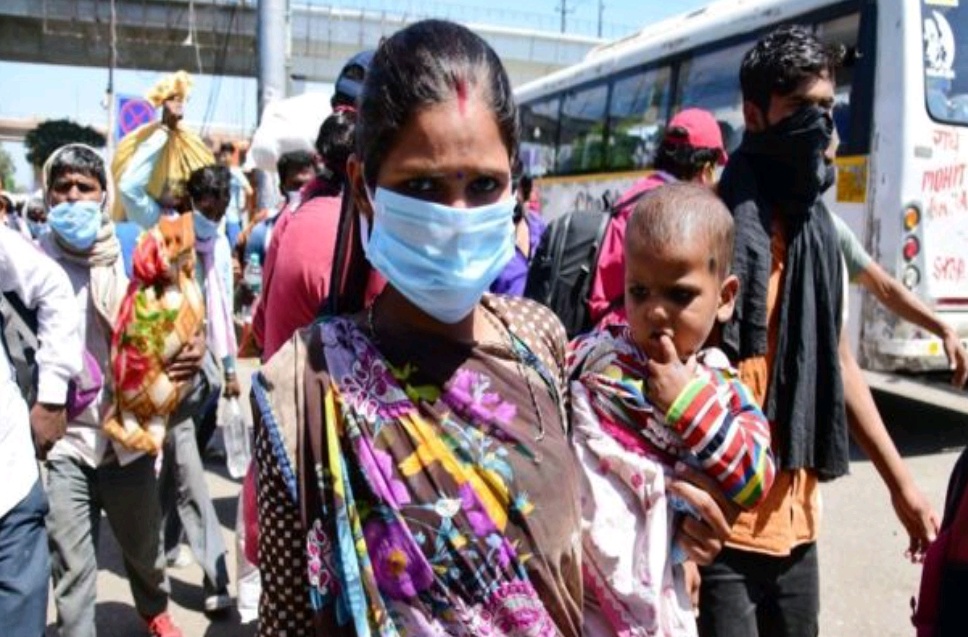 The crisis caught the attention of many Indians, when their hardship was shown by different TV channels about the mass exodus of hundreds of thousands of migrant workers desperately trying to return back home in their own country. With trains, buses suspended and taxis unaffordable, walking was the only option left for many. The sides of the highways were soon lined, jammed with people, bags slung over their shoulders, many with nothing but flip-flops on their feet. Some of the migrant workers demanded transport to return home. Some were even desperate to walk more than 500 kilometres only to reach back to their villages.

The staggering exodus brought memories back of reminiscent of the flight of refugees during the bloody partition in 1947. Millions of bedraggled refugees had then trekked to East and West Pakistan, in a migration that displaced 15 million people
The government’s callous attitude toward these workers was displayed all the more when state governments issued frantic orders to seal interstate borders and for people to maintain their distance from others so that the virus may not spread. They said that those on the move should quarantine for 14 days. Yet, how could they?

Under various legislations, like the Interstate Migrant Worker Act (1979), and the Street Vendors Act (2014), the state must keep a record of migrant labourers; there is little administrative oversight of their work conditions nor there proper documentation. It is hard to estimate the number of men, women and children trudging home across this vast country these days. Reports say that there are currently over one million people unable to return to their home cities and villages, accommodation. Further, a report says that Government authorities are currently running over 22,500 of these camps, accommodating about 630,000 people. The remaining 400,000 people are in 3,909 NGO-run facilities.

These facilities are dangerously cramped and unhygienic. While the World Health Organisation and other medical experts insist that social distancing must be practised, this is impossible for those stranded in these camps. People in such cramped quarters could facilitate the rapid transmission of disease. The extension of lockdown until 3rd May worsens the situation.

The Indian ruling elites, like their capitalist counterparts around the world, is indifferent to provide the most minimal requirements to sustain the lives of millions of the poorest and most exploited sections of the working class. As the crisis worsened, state governments scrambled to arrange transport, shelter and food. Though the Indian migrant workers stranded abroad were brought back home in special flights, the plight of workers at home struck a jarring note.These informal workers are the backbone of the big city economy. Escaping poverty in their villages, most of the estimated 100 million of them live in squalid housing in congested urban ghettos and aspire for upward mobility.

These stranded rural migrants are likely to reach home in packed buses and unreserved Janta trains after 3rd May where the government might give further relaxation .One cannot rule out the fact that this reverse migration of migrant workers returning home could become vectors carrying the corona virus to unaffected villages and rural India and that many outmigration areas are likely to have COVID-19 cases. Coupled with scotching heat of summer and climate change it has greater health risks. These could turn out to be potential new hotspots areas as thousands of rural migrants return to their respective villages.

It raises fear that a lockdown designed to slow the transmission of the corona virus may actually end up spreading more in rural areas once all the migrant workers return home .With no proper health care facilities, government hospitals would run out of beds in rural India even if 0.03 per cent of the rural population is hit by the virus. It is very difficult to forecast that peak will arrive by May 3rd, 2020 or when it will come in some states until the other states follow the Kerala model of flattening the curve that followed the steps which were simple but proactive. With no vaccine in sight, the state has relied on an aggressive tried-and-tested system of early testing, contact tracing, isolation, social distancing promotions, longer quarantine period, building thousands of shelters for migrant workers stranded by the sudden nationwide shutdown and distributing millions of cooked meals to those in need.. The state’s high literacy rate and positive political participation also factored into its strong response to the COVID-19 crisis.

Dr Sangita Laha- (The author is an Associate Professor & Dean of Faculty of Law, National University of Study of Law, Ranchi)