Another story of a vacation gone wrong with an emotional climax, Table No 21 is the antithesis of The Impossible, being a superficial, unrealistic, amateurish mess that questions the very existence of humanity. Sia (Desae) and Vivaan Agasthi (Khandelwal) are a young couple on a prize holiday to Fiji, where they meet Mr Khan (Rawal), the owner of the resort they’re in, who offers them a chance to play his game show for Internet voyeurs, Table No 21. Named after its prize money, Rs 21 crore (though converting from Fijian dollars to rupees shows that it should be called Table No 30.7293, unless Sia’s instant calculation incorporated the 30 percent gift tax), the game is a variation of Sach Ka Saamna, that nasty show hosted by Khandelwal. The game gets more sinister as Khan seems to know the couple’s darkest secrets, and his sadistic actions are explained in a didactic ending that comes from so far out of left field that this reviewer’s jaw still hasn’t left the floor. If it hadn’t been so badly executed, the finale could have saved this trainwreck. The rest, however, offers little redemption, with dialogues that could have been written better by monkeys on typewr iters and the awkward chemistry between Desae and Khandelwal leading to much unintended humour.
Ajachi Chakrabarti is a Correspondent with Tehelka.
ajachi@tehelka.com 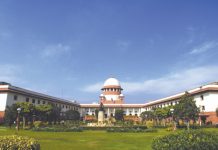 My lords, judges shouldn’t be rewarded for verdicts