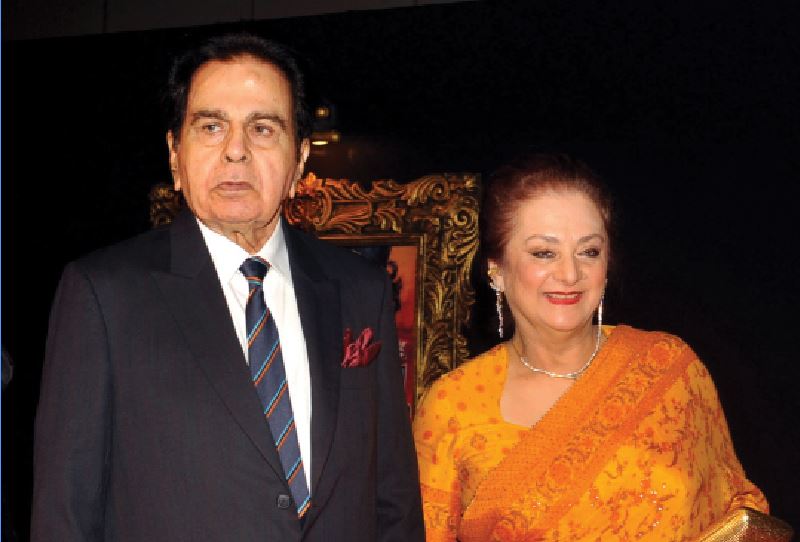 As I was about to file my this column, came in the news of the passing away of the legendary film star, Dilip Kumar…nostalgia tightening its hold, taking me back to the summer of 1999, when I had met him and his wife Saira Banu.

I was well aware that the couple, Saira Banu and Dilip Kumar, were in New Delhi. And I was keen to interview them. Tried all possible sources but the closest I could get was to the particular homoeopath known to the couple. And the closest he could get in helping me out, was to tell that they were staying in a particular five star hotel.

I landed at the hotel lobby but before I could move towards that particular floor, I could see Saira Banu and Dilip Kumar in the glass-lift … on their way down, touching the ground floor.

I rushed towards them, but before I could utter those well-rehearsed lines, dragging along the homoeopath connection, I could see a definite frown spread on Dilip Kumar’s face. It was rather too obvious he’d disliked this intrusion and said so, in chaste Urdu. Well, so chaste that some of those high sounding words well-webbed in those lines he’d uttered seemed rather too dramatic! Words to the effect that I should have come only and only with a prior appointment as they were very busy, meeting the political who’s who. After all, it was that crucial and tense phase for the couple as that huge political controversy was raging, with Dilip Kumar refusing to return the award, Nishaan-e-Imtiaz, which the Pakistan government had bestowed on him.

Dilip Kumar sahab had then spoken for a brief while, and had also said that maybe we could meet later in the week, with a formal appointment. Also, he had stressed that Saira Banu would give an interview on his behalf…Saying all this, he’d continued walking out of the lobby with Saira Banu and several others who had gathered around. Perhaps, accompanying them to the various politicians they were going to meet that evening.

Later, as I had interviewed Saira Banu for a national daily, I had asked her about the award controversy and her reactions … In fact, in one of my previous columns I have already mentioned all those details so little point repeating. I had also asked her to comment on the fact that certain right-wing political quarters in Mumbai were not happy with the social service work she had undertaken after the Mumbai riots of 1992-93 and that’s why the backlash? She had reacted, “There is a communal trace to the whole issue, but here let me add that I do social service for all people, people from different communities and try to reach out to whoever is in need…And I do so with a group of close friends who belong to different communities; in fact, most of my friends are Hindus.We ware not high profile at all but try to serve in a quiet way …I feel very upset by what’s been happening. Witnessing those riots was a nightmare and the growing fascism and communalism has hurt me, shattered me. I feel grieved as though my dream has been broken, my glass been shattered. One hopes that commonsense prevails and this growing communalism and fascism get controlled, so that we can all coexist in peace.”

I had also asked her comment on the fact that though film stars do stand united in times of crisis but in that crisis that she and her husband were facing, most film stars maintained some sort of a silence. And this is what she had to say: “Tell me have they stood by anyone! Nobody takes a stand these days! Even when Sanju (Sanjay Dutt) was being harassed, the only two people who spoke out for him were Shatrughan Sinha and my husband. Even when the film ‘Fire’was running trouble it is my husband who spoke out.”

My parting question to her was: You have been married to Dilip Kumar for years. How would you describe him?

WHAT’S BEEN HAPPENING TO OUR PRISONERS!

As the news of Father Stan Swamy’s death came in, one felt sapped and restless; sat questioning the very system. Even a 84 year old ailing priest not spared! The ruthlessness of the system can kill ever so ruthlessly! In fact, Father Stan Swamy had been focusing on the fact that ever since he was jailed his health worsened, yet he wasn’t granted bail. Why?

Wondering what happens to the survival of the others, all the co-accused in the case. No, none of them young, nor in good health… jailed for the last several months, with deteriorating health conditions. Will they survive in those jailed conditions? Stay alive and intact, and for how long? Who will be answerable if they perish? Will the State be held accountable for their deaths? Why are these men and women caged when they could be questioned even in the un-locked conditions? Will those in governance be answerable!

In fact, for the last few hours I have been reading this latest book on the situation of the prisoners. In fact, the very title of this book — Innocent Prisoners. Begunah Qaidi. Stories of Muslim Youth Falsely Implicated In The 7/11 Train Blasts and Other Terror Cases (Pharos Media) – relays the stark reality to those sitting implicated and imprisoned.

This book has been authored by one of the former prisoners, Abdul Wahid Shaikh, who was himself implicated in the 11 July 2006 Mumbai train bombings case. He was imprisoned for nine years, till he was declared innocent and acquitted. And in this book he has put down his experiences in the jail and that of his fellow prisoners, at the hands of the police and investigating agencies and jail staff. In fact, the 500 hundred pages to this book are laced with facts, complete with specific dates and names and the particular instances.

This former school teacher who was teaching in a Mumbai school has been brave to put down each little detail to the prison life and the aftermath that follows. In fact, a film producer is said to have been so taken up by this man’s grit that a full-fledged feature film is near completion on the life and times of Abdul Wahid Shaikh. After all, this former prisoner has much to offload, in that absolutely stark blatant way. To quote from the preface to this book, “Despite being innocent when we were arrested in the 7/11 blast case, for several days we did not understand what exactly was going on with us. We thought the police has arrested us mistakenly and would release us soon. But as the days went on, our hopes started fading away…” To further quote the opening lines from the first paragraph of the very first chapter to this book: “We all know very well that the political masters have always used the police for their vested interests in our country. Unfortunately, the police have become so uncontrollably strong that today they have become totally unquestionable. The nation has practically become a police state…How will the State terrorism end? When will it end? There is need to seriously think about this. As long as we do not think of ending state terrorism, actual peace and progress will remain only a dream. The sooner the government realizes it, the better it is for the nation.” 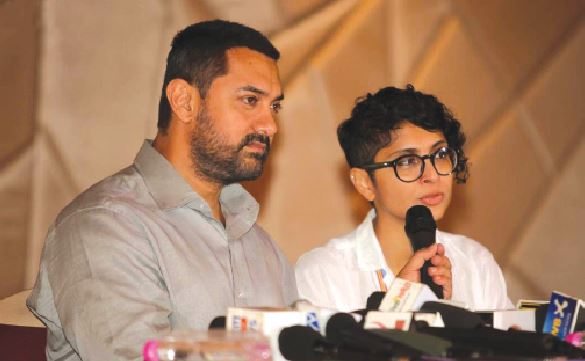 Nah, I’m no fan of Bollywood’s Aamir Khan’s acting skills. But I must say that I was rather impressed the way he worded the announcement of his divorce. It carried a sense of maturity. As though nothing sensational or heart-breaking taking place. But one of those realities to life. Thankfully, he didn’t even want to dwell on the reasons for the divorce, nor what lies ahead.

With a huge number of Indian marriages turning rather frightful, at least Aamir Khan carried the courage to make that crisp announcement. Believe me few Indian men and women would do so, no matter how bad the marriage gets.

In fact, I m reminded of my conversations with much married couples who told me how lonely it got for them! I was taken aback, “But you people are all married,” I near- screamed.

They screamed back: “It’s all a façade. The spouse is never there and even if he is, we don’t talk to each other, don’t eat or sit together. We snore in our respective bedrooms. Even if my head is bursting with migraine pain there’s no one to hear my cries for help. The undercurrent of tension in the house is eating me up, making me feel ill.”

Marriage counsellors focused on the fact that couples sit back lonely and depressed in unhappy marriages. To quote a marriage counsellor : “Very often, men and women in their 60s and even 50s come to see me; they start off by talking of depression but soon they start recounting details of the unhappy marriage in which they are trapped. This, in turn, triggers off a whole lot of ailments. As a counsellor, I make the client see the options available. Those who decide to end an unhappy marriage rationalise along the strain: ‘If I’ve been so unhappy in this marriage all these years and will continue this way till my dying day, but if I end it there could be some chance, however slim, of finding some happiness at some stage.’ The older the person gets, it becomes more difficult to get out of a marriage for varying reasons. Even if they know it would be better to end the unhappy marriage, they resign themselves to their fate.”

Another so called ‘expert’ on the subject said: “Dead marriages in which people are trapped are a reality of the day. Two major factors are largely responsible for this. One, women have changed and become more outspoken, whereas men haven’t moved ahead with the times. Two, patience and desire to communicate is fast decreasing and there are outlets available, like extra-marital affairs. Also, people do not opt for counselling. So many clients come to us just a day before filing for divorce!”

To quote another marriage counsellor, “What you’re seeing is just the tip of the iceberg vis-a-vis the high percentage of people going through unhappy marriages. Some are walking out and many are resorting to relationships outside marriage…Something or everything is getting wrong with the very basis, that is, with the husband-wife relationship. What, with spouses not even sitting together, rarely talking and going out together, obviously there is much loneliness in a marriage. Even in their 80s, people are talking of acute loneliness. Men are looking for a companion not just for emotional support but even for their physical needs. We get so many letters from men in their 80s who write to us about need for emotional support and a companion.” 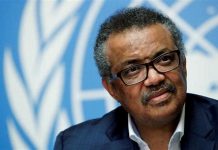