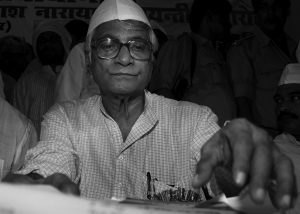 George Fernandes represented India’s much-discussed contemporary history of nearly half-a-century, mid-60s till the dawn of the 21st. century. He was on the forefront to challenge the much-dreaded Emergency era 1975-77, witnessed the rise and decline of one-party rule, rejected the social engineering for political assertion in the caste-ridden Bihar politics.

He successfully represented Muzaffarpur in the Lok Sabha, though having no caste-base or religious following. Maybe, his firebrand socialism could not really influence UP socialists, who talked about socialism, but never hesitated to harvest political mileage in the name of castes.

It could have been the reason, that the self-acclaimed UP socialists, who successfully enjoyed power were not present on the Thursday afternoon, January 31, when his flower-decked green army cortege arrived at the Lodhi Road electric crematorium.

The floral wreath on behalf of President Ram Nath Kovind was accompanied by the last post bugle to pay homage on the behalf of the nation there were floral tributes on behalf of the Indian Federation of Working Journalists and its president K. Vikram Rao, who was also an accused in the Baroda dynamite case.

Among those who were present give a tearful farewell to the much-admired solider of Mother India, the Tibetans with their rosaries and Buddhist prayer books. They had lost their country to the Communist regime of the People’s Republic of China in late fifties of the 20th century.

Similarly, there were some Burmese praying for him. They had found a guardian in him, when they had taken refuge in India following the military crack-down on the pro-democracy National League of Democracy, which had won the elections in their country under Aung San Su Keyi.

George, a born rebel, strengthened the Indian nation and her ideals, represented all inclusive India. He was bed-ridden for the past several years being looked after by his devoted wife, Laila, daughter of the legendary, Humayun Kabir, a successor to Maulana Azad in the Union cabinet. There was a convergence of India’s religious traditions. Laila, a devout Muslim, supervised the last rites, insisted at the electric crematorium. Their Christian son is going to bury the ashes at a cemetery. He had admirers across the political spectrum.

The Congress Party was represented by no other than Dr. Manmohan Singh, who served India as her Prime Minister for 10 years. The Bihar Chief Minister, Nitish Kumar, who considered George his political guru, had arrived in Delhi to be present in the funeral. Swaraj Kaushal, a senior Supreme Court lawyer and a former governor of Mizoram, having a prolonged 50-year old association with George, was present at the funeral to give him an emotional farewell.

He and his wife, Sushma, presently External Affairs Minister, had taken up a number of cases on behalf of George, including the Baroda Dynamite case. Among the Union Ministers Ram Vilas Paswan, Ravi Shanker Prasad, Dr. Harsh Vardhan were present. Georges former cabinet colleague and the BJP veteran, L.K. Advani, in spite of his frail health, was present to pay homage to the departed soul.

With his departure, the curtain of the firebrand committed socialist movement appears to have been finally drawn till a new George appears on the country’s political horizon. It appears to be unlikely in our lifetime. 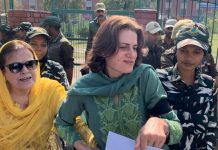