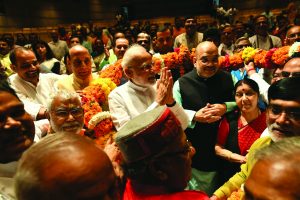 The nation listened with rapt attention at what Prime Minister Narendra Modi was offering this Independence Day, the last speech of the first round, a few months ahead of general election. Clearly the Prime Minister too had it all over him. Modi brought to best use his charisma and his earthly connect on this occasion. His style that marks him apart along with his eloquence translates into a kind confidence which by far any Indian would like to see in its leader. With his body language expressive of his charged confidence and personal appeal, he spoke in his resilient, assured manner braving the hot humid August 15. He was giving a vision map.

There’s no denying that Modi’s speeches are rhetoric fireworks, they are a roller coaster and people enjoy listening to him. The accompanying theatrics make him come across larger than life yet real, the demagogy that he envelops, the currency, the brand that he is, the confidence, positive energy, readiness that characterises him is what is his USP that catapults him into the likes of Indira Gandhi. On this Independence Day too, he came across as the man of the moment with his oratorial luxuries.

Crooning over the achievements of his government with election 2019 as the target, like Arjun’s eye in the epic Mahabharat, Modi did not leave any stone unturned in wooing the voters of India. The speech of Modi was a report card of his government where he gave himself full marks on toilets construction, power, LPG, highway construction, building homes. As the PM, Modi was out this time selling his ‘’new’ India vision aggressively. A dream merchant selling Man Mission in Space as next big dream. Gifting an aspiration to people, asking them to feel proud of being Indian, Modi said that the power of the Indian passport has increased and that India’s standing has improved in the world today. He came across as a man who wants to carve out a destiny. This time he knew that he had to give a speech which ensures that he gives the next 5 more.

As he said, we can take tough decisions because nation’s interest is first for us, not the party’s, he set the electoral narrative. Knowing that he now doesn’t have anything concrete to offer in terms of economy, Modi harped upon populist schemes. He pressed all right buttons in his speech- poor, farmers, youth, middle class, soldiers, tax payers, corruption, middleman, power brokers. On women who are his key vote bank he struck a chord when he patted his back on women making it as Supreme Court Judges, women in the cabinet, women winning medals in sports and on women’s victory on triple talak. From scaling Mt Everest by tribal children to expedition to South Pole by Indian women.

A Santa Claus like Modi announced ‘Ayushman Bharat’’, the National Health Mission also popularly called as Modicare, the largest government funded healthcare programme which will be rolled out on September 5, 2018 and removal of AFSPA from North East. He issued a warning to spiralling atrocities on women and children saying rapes should be widely reported and rapists should be sent to gallows for their crimes to enforce the rule of law.

Modi did not spare the opposition for UPA’s red-tapism culture, power brokering, policy paralysis, no action on GST and India’s low global image.

An analysis of his four years have seen his priorities change. This time around he was setting a tone for elections in Madhya Pradesh, Chhattisgarh and Rajasthan to convey that he is a PM who believes in performance. Since 2014 this is the first time that the narrative is against him whether its economy or social milieu of the country, be it lynching, sliding growth or jobs. So this time he made sure that he pushed hard of the positive narrative.

However Modi emphasizes the benefits that GST and Demonetization would bring for the country’s future and interests they were the biggest fiascos at the end of the common man. He did not talk of increasing oil prices, falling rupee, upward inflation, low exports, bank crisis, lynching. There was no mention of Pakistan and cross border terrorism, NRC and farmers suicides which are the underlying problems in the country presently. He avoided contentious & controversial issues, it was all about the ‘feel good’.

Modi came in 2014 with a promise of making India a manufacturing hub which hasn’t shown tangible results. Niti Ayog which was replaced by Planning Commission which much of a hoopla hasn’t done much in terms of structural reforms. The export scene is pretty unsatisfactory too.

Close to 2019 General Elections, Prime Minister is up against challenges which will decide who the next PM will be more than which government comes to power. The prime challenge and what is important is that he faces the grand alliance, the Mahagathbandhan, stitched up lately. And so this time he aimed at reaching out not to alliance partners but newer constituencies of dalits, OBC’s, minorities and others. Major opposition parties have come together with the prime aim of ‘Modi Mukt Bharat’’. Congress has sharpened its attacks and is in the final process of chalking out lethal and unmissable strategy to corner Modi and his policies. AICC General Secretary Ashok Gehlot says Congress is ready for the elections if they are preponed as Modi pushes for ‘One Nation, One Poll’. Congress too has devised its slogan against BJP. Congress spokesman Randeep Surjewala says BJP is following the policy of ‘Divide, Deceive and Distort’. The party attacks Modi of strangulating the voice of media too after overlooking judiciary.

Rahul Gandhi has not just trained himself to be aggressively vocal in attacking Modi personally as well as on his style of functioning, like the dishing out ‘jumlas’ and acronyms like ‘reform, perform & transform,’ the Congress President has taken on the mother organization RSS with blistering attacks at its very nature on outside soil. Rafale scam is being positioned as its nemesis. Recently Kerala floods have pitched centre against the state over humanitarian assistance for the flood ravaged people. Rajasthan Congress is claiming of bogus voter list numbering into thousands. TMC, TDP, BSP, SP, CPI, RJD and other satraps have closed ranks to present a united coalition. Crime like rapes and girl child abuse have figures breaking all records particularly in the northern belt. Cow vigilante and moral policing are on a free run. Lumpen elements are bereft of fear of law. Eating and dressing as a matter of personal choice is at all time risk. PM’s J&K thrust and policy on Kashmir having hit the rock Modi appeared on the backfoot as he exhorted Vajpai’s, ‘Insaaniyat, Jamhooriyat, Kashmiriyat.’ Finally the Prime Minister will have to answer for this.

Economy is the biggest challenge that Modi might face a backlash on. Inflation is high, oil prices are going steeper by the day, job situation is tense and getting worse. If oil prices continue to rise, it will affect the rupee which will affect inflation. At the end Prime Minister Modi can only win election on the state of the economy. Challenges are clear-growth is sliding, rupee is in problem, banks are in serious trouble. Add to this the Nirav Modi and Mehul Chauksi scam of debt and defaulting that has taken a toll on the much publicized clean image of the system under Modi.

Farmer agitation and the disenchantment in the farmer communities is only simmering. Prime Minister’s promise of 50% increase in MSP is not really on ground and there is not much that his rhetoric will be able to do now.

On the international stage US sanctions on Iran will affect India. Trump leashed tariff war between US & China will hurt India badly too.

Words apart, how much have the promises made in the last 4 years translated on ground is a contentious matter. The Prime Minister’s speech was designed to address anti-incumbency, to be back to being the change agent.

Modi’s speech was a clarion call. A call that said he is restless, he is impatient, he is anxious to move forward, were pointers of his ambition to be there asking for another chance to carry his work forward. His speeches all along have been about his hard work, his life, his vision for the country which he uses as influencers.  It was a far more politically significant oratorial performance as some would call it. A mix of political and personal. Undoubtedly Modi is a master or symbols and oratory.

The template of his speech was clearly Lok Sabha elections 2019 which by all guesses may be just about 4 months away.

Will the people buy what the master orator is saying?

His task is more challenging this time. But he seems convinced that he’s going to come back in power.

Ending his speech with poetry was a first too. Was Prime Minister Modi trying to reposition himself as a softer, more inclusive leader? Starting with placing himself as futuristic, he said that his goal (manzil) was to finish what he had promised. 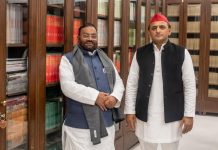