At least seven people were killed and 12 others injured on Wednesday when their bus plunged 150 meters into a ravine, Colombia’s Transit Police said.

According to the reports, the driver lost control of the wheel and veered off the road in the town of San Mateo, in central Boyaca department, news agency reported.

Authorities said, “the cause of accident appeared to be a mechanical failure, but the vehicle, which was carrying 19 passengers, will be subject to revision, said chief of Boyaca’s Transit Police.

The head of the police department in Boyaca said, “the 1967 model did not have the necessary paperwork showing it had undergone periodic mechanical tuneups.”

“Three lost their lives on the site while four others after receiving medical attention,” said officer.

The injured includes mostly farmers who were heading to a market, are being treated at the San Mateo Hospital. 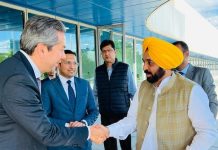 Punjab CM Bhagwant Mann deplaned in Frankfurt as he was ‘too...