Sixty-eight people have died in a fire which was allegedly set in an attempted jailbreak inside jail cell area at a police station in Venezuela’s Carabobo state on March 28.

According to Chief Prosecutor Tarek Williams Saab, 66 people were prisoners, and two women were staying overnight.

The incident seems to be the latest addition to the series of deadly incidents in Venezuela’s overcrowded jails.

“In light of the terrible events that took place in the Carabobo state police headquarters, where 68 people died in a presumed fire, we have appointed four prosecutors… to clarify these dramatic events,”

“A serious and profound investigation has been initiated to find the causes and those responsible for these regrettable events,” he said on Twitter, expressing solidarity with relatives of those who died.

The incident was followed by agitation as the police had to use tear gas to disperse the kin of those who were killed.

According to a video posted on Twitter,  dozens of people were demanding information in front of police guarding the site.

Venezuela’s prisons are generally said to suffer from overcrowding and lack of basic amenities. 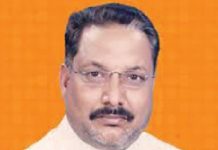