A passenger plane with 66 passengers onboard crashed in central Iran on February 18. All the passengers are believed to have been killed.

The ATR 72, a twin-engine turboprop crashed due to bad weather into the Dena Mountain near the town of Semirom.

There were 66 persons onboard including 60 passengers, two security guards, two flight attendants, the pilot and co-pilot.

The Iran Aseman Airlines aircraft disappeared from the radar soon after taking off from Tehran.

According to reports, the plane crashed just 185 km away from its destination.

According to Semirom officials, due to heavy fog and rain it was hard for rescue operators to reach the crash site. Rescue teams reportedly reached the crash site by land and were trying to find the debris 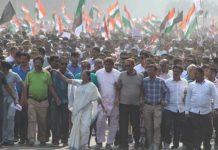