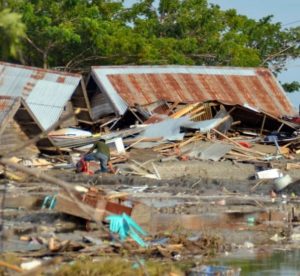 At least 48 people have died, and more than 350 people were injured after a strong tsunami triggered by a 7.5-magnitude earthquake hit a coastal Indonesian city on Friday.

As per the reports, three shallow quakes of 6.0, 7.4 and 6.1-magnitude struck off the central province and triggered the tsunami near Talisa beach of Dongala district.

Thousands of homes have been destroyed, bridges have collapsed, and the electricity is cut off in most of Palu City in the Dongala region of Sulawesi, the officials said.

The tsunami triggered by the quake-devastated residential areas and buildings in the coastal areas. Specific damage was still unknown as the risk assessment was going on, the meteorology and geophysics agency said.

The earthquake hit in the evening on Friday. An early tsunami warning was issued by the Indonesian meteorological agency but lifted within the hour.

Indonesian President Joko Widodo took to his twitter account on Friday and said, “I am monitoring the situation and preparing for any post-earthquake eventualities. We wish our brothers and sisters remain calm and be safe.”