Chandigarh: Bhagwant Mann-led AAP government in Punjab announced 300 units of free electricity to households from July 1.
The announcement was made in advertisements published by the state’s information and public relations department in various newspapers on Saturday.

It was related to a 30-day report card of the AAP government in Punjab. A formal announcement is expected to be made later on Saturday.

Giving 300 units of free electricity was one of the major poll promises of the Aam Aadmi Party in the Punjab assembly election.

Chief Minister Bhagwant Mann had on Thursday said in Jalandhar that “good news” would be announced on April 16. Punjab was already providing free electricity to the farming sector. It also provides 200 units of free power to all Scheduled Castes, backward castes and the below poverty line households. 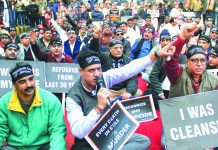