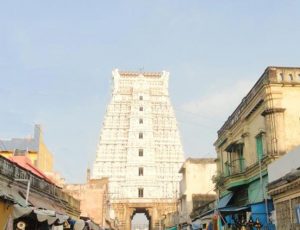 Three golden crowns went missing at Sri Govindarajaswamy temple at Tirupati on Saturday. The Tirumala Tirupati Devasthanams (TTD) and the police were shocked at the manner in which the crowns – weighing a combined 1300 grams of gold, with precious stones studded all over went missing from the temple located at the heart of the city. The three golden crowns were adorning the deities Lord Govinda Raja Swamy and his consorts Bhudevi and Sri Devi were found missing from the Govinda Raja Swamy temple at Tirupati in Andhra Pradesh.

The theft was noticed around 10.30pm on Saturday following which the police was informed. It has been told by sources that a manhunt has been launched with six teams headed by two sub-divisional police officers. The main doors of the temple were closed after the evening ritual of naivedyam was offered to the deities. When the doors were re-opened half-an-hour later, the crowns were found missing.

In the temple three priests perform duties in shifts. The temple always witnesses heavy crowds. With security sleuths standing at vantage spots and CCTV cameras installed at crucial points, it is almost impossible to do anything without attracting observation of people like ferry valuables outside the temple complex.

The alleged theft is said to have happened when the priests were engaged in their routine work after the ‘Suprabhatham’ ritual on Saturday. A woman constable in the  vigilance service who noticed the missing crowns and alerted the priests, who in turn informed the higher officials.