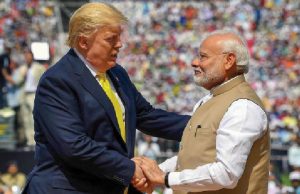 US President Donald Trump, along with First Lady Melania Trump, were on a two-day visit to India on February 24-25 and the visit hogged headlines in national and international media despite violence in Delhi. India and the US have finalised defence deals worth $3 billion, and signed three MoUs, including one in energy sector, as Prime Minister Narendra Modi asserted that the two countries have decided to take Indo-US ties to comprehensive global partnership level.

After first visiting Sabarmati Ashram, a place closely associated with Mahatma Gandhi, President Trump and PM Modi went to Sardar Vallabhbhai Patel cricket Stadium in Motera, the world’s largest cricket stadium. The stadium event in Ahmedabad is being touted as an extravaganza of Indian reciprocity to the “Howdy, Modi!” event in Houston in September last year, when a 50,000-strong crowd greeted PM Modi as he shared the stage with the American President. 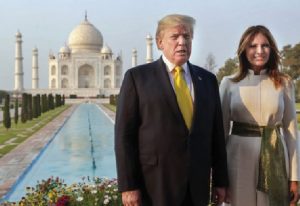 The big-ticket trade deal that has raised high expectations, which could not be hammered out during PM Modi’s US visit in 2019, was also seemingly deferred now as can be discerned from pre-visit statements of President Trump. President Trump reportedly told the media persons a few days prior to his departure for India, “Well, we can have a trade deal with India, but I’m really saving the big deal for later on.”

While viewing India as a ‘difficult trade interlocutor’, President Trump had earlier accused India of being the world’s “tariff-king”, and the Harley Davidson motorbike episode is said to the symbol of Trump’s ire. In view of the trade deficit with India that stood at $25.2 billion, of which the goods trade deficit was $20.8 billion in 2018, President Trump spurred by his ‘America First’ policy said, “We are not treated very well by India.”

With trade relations already in doldrums, Washington’s move of removing India from the list of ‘developing’ countries when it comes to trading rules, also adds to New Delhi’s dismay. A silver lining of reinvigorating trading relationship emerging from President Trump’s current visit has already been dashed by American President when he said that he was saving the big trade deal for later on. The 2020 being the presidential election year, President Trump’s every move is likely to be guided by domestic policies that warrant queering the pitch for a ‘fair and reciprocal’ trade deal, especially in view of Trump’s reported susceptibility to interests groups within the US that are vital to his political interests.

American trade negotiators in the recent past, as per media reports, have been pressing India hard to get market access for — among other things — cranberries and pecan nuts, that contribute substantially to the economy of 15 American states. This scenario, as some experts opine, enforces two challenges in bilateral ties. Firstly, it vests enormous power in the hands of US Trade Representative who is said to be a trade hawk; and secondly, trade has assumed the role of a singular metric for bilateral ties between Washington and New Delhi.

Admittedly, lack of a ‘big-ticket trade deal’ need not be construed that India and the US aren’t trading with each other. Going by trade figures, from 1999 to 2018, trade in goods and services between the two countries surged from $16 billion to $142 billion. India has emerged as the eighth-largest trading partner of US in goods and services. Undeniably, growth in trade is bound to give rise to tricky issues; however, in view of hard American stance on pushing up any big trade on its terms, Indian officials have also shown diplomatic craftiness by saying that India is in “no rush” to hammer out a deal in a hurry.

In view of the prevailing wide gulf in the positions of the two sides, many experts were expecting a limited trade deal during the current visit, and in the wake of the report that the US Trade Representative was cancelling his visit to India, the Indian Government has hurriedly let it be known that India is offering to partially open up its poultry and dairy market to sweeten the deal. Concomitantly, President Trump himself was said to be playing it cool by saying “if we can make the right deal, we’ll do it.”

Undoubtedly, Indian side was under pressure in view of American cancellation of India’s General Scheme of Preferences (GSP) privileges, Trump administration’s approach driven by ‘America first’ and maintaining a semblance of trade equilibrium along with American trade officials’ insistence on India to open market to more US exports, including farm goods, medical devices, and dairy products. Some experts felt that a ‘mini-trade deal’ could be hammered out during Trump’s current visit and that may have included some Indian concessions on agricultural tariffs and a slight reduction in tariffs on industrial goods like motorcycles.

Nevertheless, Indo-US trade discussions are taking place at a critical time for India, which is confronted with an economic crunch, economic slowdown affecting all sectors of economy; unemployment at near a half-century high, and sluggish growth, and all these are going to enfeeble India’s bargaining clout with Washington.

Friendly nature of bilateral relationship between India and United States and ‘personal rapport’ between President Trump and PM Modi afford ample opportunities for both sides to take the growth trajectory to a new level. However, both sides have accorded priorities to their respective strategic and national interests. Irritants on big-ticket trade deal can be sorted out through negotiations in ensuing months in an amicable manner. Other aspects of bilateral relationship like defence cooperation, mutual cooperation on global and regional problems, especially on counterterrorism, continue to thrive between Washington and New Delhi.

The Indian side has acknowledged the “unprecedented” support extended to India by Trump Administration after the 2019 Pulwama terror attack by Pakistan-based Jaish-e-Mohammed and American help in the UN designation of terrorists operating out of Pakistan. So, India expects that this cooperation could be further strengthened during Trump’s current visit that also allows the two sides to exchange views on regional issues such as the situation in Afghanistan and the Indo-Pacific. Concurrently, there were reports that contentious issues such as the H-1B visas and US concerns about data localisation figured in the talks.

Modi Government’s some recent decisions on dilution of Article 370 with regard to Jammu and Kashmir and subsequent passage of the Citizenship Amendment Act have culminated not only protests at home but also in disruption in India’s diplomatic ties abroad, especially with the United States, with President offering on several occasions to mediate between India and Pakistan over Kashmir, a move that has been firmly rejected by India. In view of the repeated statements emanating from Washington about economic slowdown in India and the floundering trade ties, some analysts have raised the question as to whether the US is deliberately using the expression of such statements as a bargaining tool to elicit more concessions from India during the current visit of President Trump to India.

Strategic and defence cooperation between India and United States has already made remarkable progress in recent years and during President Trump’s current visit, both sides inked a $3-billion deal for 24 MH-60R Seahawk helicopters for the Indian Navy and a smaller follow-on deal for six Apache helicopters.

Both sides made progress in consultations on a $1.8-billion deal for the National Advanced Surface-to-Air Missile System (NASAMS) to protect the national capital though it wasn’t clear if the sale would be cleared during Trump’s visit, added the people who declined to be identified

Media reports indicated that India was also looking at more deals — for six more P-8I long range maritime patrol aircraft ($ 1.8 billion), the Integrated Air Defence Weapons System for to shield Delhi against short-range missiles ($1.86 billion), 30 Sea Guardian armed drones ($2.5 billion plus) and 13 MK-45 naval gun systems ($1.02 billion) but it currently lacks the capacity to fund them. At the same time, the US was also pushing India to buy US fighters for its huge 114- aircraft deal for fighters. It is offering the upgraded FA-18, F-15s and F-16s for the Air Force. Thus, there also seems a strategic context to President Trump’s current visit to India and the $3 billion defence deal.

The fact of India being a major democracy is no longer the primary driver of the bilateral relationship between New Delhi and Washington presently. Several areas of dissonance have come to pervade, ranging from the US’s policy towards Pakistan-Afghanistan-Iran and Washington’s displeasure with India over the supply of certain Russia military equipment.

In order to have bargaining power in negotiations between the US, India needs to have economic clout and strategic robustness and in the wake of sluggish economic growth and its heavy dependence on defence imports, especially from Washington, Modi is expected to be at the receiving end under the ongoing negotiations with President Trump.

President Trump and PM Modi share one thing in common — disdain for media — and both rely on twitter. As one critic has observed, Trump’s over-the-top taste for tamasha fits well with that of his host PM Modi’ at a mega show called ‘Namaste Trump’ in Ahmedabad, a ritzier and bigger version of the ‘Howdy Modi’ event in which Trump participated.

After all, the net gainer is President Trump eliciting many defence and trade contracts and it was another well-designed event management for India at the expense of public exchequer without any meaningful gain.