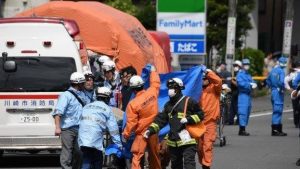 Two people were killed and at least 17 people including more than a dozen schoolgirls were wounded after a man armed with a knife went on a stabbing rampage at a crowded bus stop near Tokyo on Tuesday morning.

According to the sources, a primary schoolgirl and man in his 30s had died. The attacker also died after reportedly stabbing himself following the attack near a park in the city of Kawasaki, south of the capital.

Most of the victims were schoolgirls aged six or seven who were lined up at a bus stop, when the man began slashing them with knives.

According to the witnesses, the suspect was holding a knife in each hand and began stabbing his victims as they waited to board a bus and also shouted that he was “going to kill” the children.

The man’s identity and motives were not immediately known.

Television footage showed multiple police cars, ambulances and fire engines at the scene. Emergency medical tents were put up to treat the injured.

Japan has one of the lowest rates of crime in the world. Mass attacks are rare, but it has experienced deadly attacks involving knives.

In 2016, a man who claimed he wanted to kill people with disabilities killed 19 people and injured more than 20. 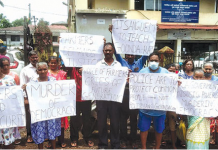