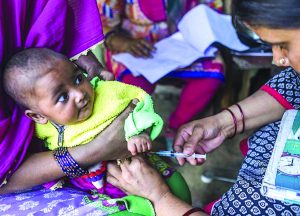 India, according to the UNICEF, has 2.9 million children who have missed out on the first dose of measles vaccine between 2010 and 2017 despite over 80 per cent of immunisation coverage. The country, with its large annual birth cohort of 25 million, is followed by Pakistan and Indonesia — 1.2 million each, and Ethiopia 1.1 million. The situation is “critical” in low and middle-income countries.

In 2017, for example, Nigeria had the highest number of children under one year of age who missed out on the first dose of vaccine, at nearly 4 million, the United Nations child health body said. The United States topped the list of high-income countries with most children not receiving the first dose of the measles vaccine between 2010 and 2017 at more than 2.5 million.

It is followed by France and the United Kingdom, with over 600,000 and 500,000 unvaccinated infants, respectively, during the same period. An estimated 169 million children missed out on the first dose of the measles vaccine between 2010 and 2017, or 21.1 million children a year on an average, the UNICEF said.

Widening pockets of unvaccinated children have created a pathway to the measles outbreak around the world. “The ground for the global measles outbreaks we are witnessing today was laid years ago,” UNICEF Executive Director Henrietta Fore said. “The measles virus will always find unvaccinated children. If we are serious about averting the spread of this dangerous but preventable disease, we need to vaccinate every child, in rich and poor countries alike.”

In the first three months of this year, more than 1,10,000 measles cases were reported worldwide — up nearly 300 per cent from the same period last year. An estimated 1,10,000 people, most of them children, died from measles in 2017, a 22 per cent increase from the year before, the body said in a statement.

Two doses of measles vaccine are essential to protect children from the disease. However, due to lack of access, poor health systems, complacency, and in some cases fear or skepticism about vaccines, the global coverage of the first dose of the measles vaccine was reported at 85 per cent in 2017, a figure that has remained relatively constant over the last decade despite population growth.

Global coverage for the second dose is much lower at 67 per cent. The World Health Organization (WHO) recommends a threshold of 95 per cent immunisation coverage to achieve so-called ‘herd immunity’. “Worldwide coverage levels of the second dose of the measles vaccines are even more alarming. Of the top 20 countries, with the largest number of unvaccinated children in 2017, nine have not introduced the second dose,” it said in the statement.

Twenty countries in sub-Saharan Africa have not introduced the necessary second dose in the national vaccination schedule, putting over 17 million infants a year at higher risk of measles during their childhood. “Measles is far too contagious,” said Fore, adding that “it is critical not only to increase coverage, but also to sustain vaccination rates at the right doses to create an umbrella of immunity for everyone”.

“Measles is far too contagious,” said Fore. “It is critical not only to increase coverage but also to sustain vaccination rates at the right doses to create an umbrella of immunity for everyone.”

Resurgence of the once-eradicated, highly-contagious disease is linked to the growing anti-vaccine movement in richer nations, which the WHO has identified as a major global health threat.

The anti-vax phenomenon has adherents across Western countries but is particularly high profile in the US, where it has been fuelled by medically baseless claims spread on social media.

The US recorded 695 cases of measles in 2019, the most of any year since the disease was declared eliminated at the turn of the century. “The high number of cases in 2019 is primarily the result of a few large outbreaks — one in Washington state and two large outbreaks in New York that started in late 2018,” the Centres for Disease Control and Prevention said.

Many countries have not introduced the second dose, which is given after the age of four. Twenty countries in Sub-Saharan Africa do not have it in their immunisation schedule, which means that 17 million infants are at higher risk. Between one and three people in every 1,000 who catch measles will die, it is estimated, and there are serious complications in some who survive such as blindness, encephalitis (an infection that causes brain swelling) and pneumonia.

Dr Robin Nandy, Unicef’s chief of immunisation, said: “I’m extremely worried and everybody should be worried. I’d be very disappointed if we were not worried about it. We have had a vaccine for a number of decades now. It is inexpensive, efficacious, safe and widely available. Despite this we are seeing outbreaks all across the world.”