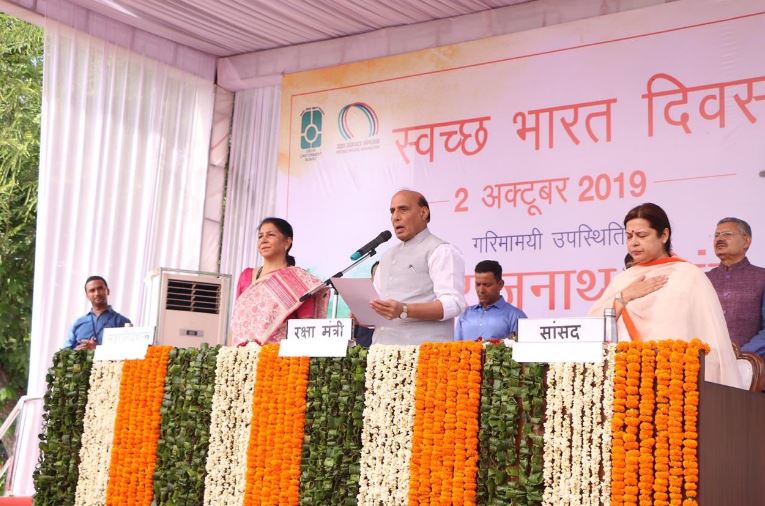 Defence Minister Rajnath Singh on Wednesday unveiled a statue of Mahatma Gandhi in Delhi Cantonment and paid rich tribute to the Father of the Nation as a rare person who wielded so much influence over people without occupying formal positions of power.

He administered Swacchta oath to people present at the venue on the occasion of Mahatma Gandhi’s 150th birth anniversary.

Addressing the gathering, Singh said that the cleanliness ideas and works of Mahatma Gandhi were made into a people’s movement by Prime Minister Narendra Modi. The result is there for everyone to see. Coverage of toilets in households has increased from 37 per cent in 2014 to 98 per cent now. In all, total of 11 crore toilets have been made in the last five years.

He urged people to extend cleanliness programme to cover environment protection and to vow not to use single use plastic bags as these are extremely harmful to the Mother Nature. Instead, he advocated usage of cloth bags which are environment friendly. Rajnath Singh said it will also generate employment for the poor. He termed saving rivers from pollution is like saving our civilisation.

He later planted a sapling while taking part in ‘Swachhta Hi Sewa’ campaign.

“Participated in ‘Swachch Bharat Abhiyan’ on the occasion of 150th #GandhiJayanti in Delhi. As the world facing the challenges of climate change & other environmental issues, it is time to follow the path shown by Gandhiji to make this country and the planet a better place,” Rajnath said in a tweet.

Earlier in the morning, Singh paid tributes to Mahatma Gandhi

“Greetings to everyone on the 150th birth anniversary of Mahatma Gandhi. We bow to him for his tremendous contribution in shaping the destiny of this country. My heartfelt tributes to Bapu on his Jayanti,” he tweeted.