Fifteen people including six children were killed when suicide bombers blew themselves up during a shootout with security forces in the east coast of Sri Lanka, police said on Saturday.

The shootout between security forces and suspected Islamist militants erupted on Friday evening.

According to the police spokesman, three suspected suicide bombers were among the 15 dead after the shootout.

As per the reports, militants were suspected members of the National Towheed Jama’at (NTJ), which was behind the deadly Easter Sunday bombings in which over 250 people were killed and about 500 injured.

Authorities said the militants set off three explosions and opened fire. At least three others were wounded in the attack are in hospital.

Police said that they were trying to track down people they believe have links with Islamic State, which claimed responsibility for the suicide bombings.

Nine suicide bombers carried out a series of devastating explosions that tore through three churches and luxury hotels on the Easter Sunday.

1 dead, several injured after bus rams into truck on Lucknow-Agra... 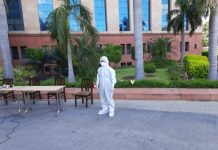