At least twelve civilians were injured in a grenade attack in Pulwama district of Jammu and Kashmir on Wednesday.

The incident took place in the Kakapora area of Pulwama, when terrorists lobbed a grenade at a team of security personnel. The grenade missed its target and exploded on road, injuring civilians

The injured were rushed to a nearby hospital for further treatment.

The area has been cordoned off and a search is underway to nab the attackers, an official said. 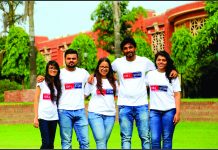