Atleast 13 persons, including twelve children and their female attendant, were admitted to the Deen Dayal Upadhyay Hospital with complaints of vomiting and fever allegedly after consuming their mid-day meal on July 24, police said. An FIR has been registered in the case.

The children who complained of nausea and vomiting are lying in the age group of one-and-a half to seven years. The staff member has been identified as 45-year-old Rama, the police official said.

According to police, 47-year-old Anita, who is a resident of Hastal Vihar in Uttam Nagar, has been running this Anganwadi center for the past 11 years. The meal (rice and boiled gram) served to the children and the attendant was supplied by Akriti Self Help Group, based in Uttam Nagar’s Deepak Vihar.

Akriti group claims that same meal was supplied to 30 more Anganwadi centres and was thoroughly checked before the distribution.

Police said, “We are looking into the matter and the investigation is still going on. The reports from the doctors will help us to establish a case of negligence and only then adequate legal action will be taken.”

The centre has 46 children and 13 pregnant women. No person has been arrested so far and probe is underway. 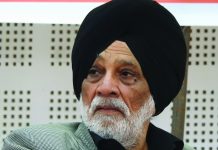