At least 11 people were killed in separate incidents following heavy rainfall which led to flooding and wall collapse in different areas of Maharashtra’s Pune, officials said on Thursday.

Six people were killed in wall collapse incident on Wednesday night in Arneshwar complex.while one other body was found in a vehicle in a canal near Sinhagad road on Thursday morning.

Pune district collector Naval Kishore Ram has declared a holiday for Thursday in schools and colleges of Pune city.

“Pained to know about the loss of lives in and around Pune due to heavy rains. My deepest condolences to the families. We are providing all possible assistance needed. State disaster management officials & control room in continuous touch with Pune collector and PMC,” Fadnavis said.

“2 NDRF teams are deployed in Pune & 2 in Baramati. One more NDRF team is on way to Baramati. State Government is also closely monitoring the dam discharge,” he added.

Many low-lying areas in and around Pune were flooded after heavy showers in the city on Wednesday. 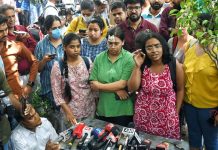